Thomaston is a village in eastern Great Neck in the Town of North Hempstead in Nassau County, on the North Shore of Long Island, in New York, United States. The population was 2,617 at the 2010 census.

There were 973 households, out of which 34.3% had children under the age of 18 living with them, 65.1% were married couples living together, 6.9% had a female householder with no husband present, and 25.5% were non-families. 21.5% of all households were made up of individuals, and 11.0% had someone living alone who was 65 years of age or older. The average household size was 2.67 and the average family size was 3.12.

The majority of Thomaston is located within the boundaries of (and is thus served by) the Great Neck Union Free School District, although a small part of the village's northeastern corner is located within the Manhasset Union Free School District (though all homes are in the Great Neck part of Thomaston). As such, all children who reside within Thomaston and attend public schools go to Great Neck's schools.

The majority of Thomaston is located within the boundaries of (and is thus served by) the Great Neck Library District, although a small part of the village's northeastern corner is located within the Manhasset Library District (though all homes are in the Great Neck part of Thomaston). The boundaries of both library districts within the village roughly correspond with those of the two school districts 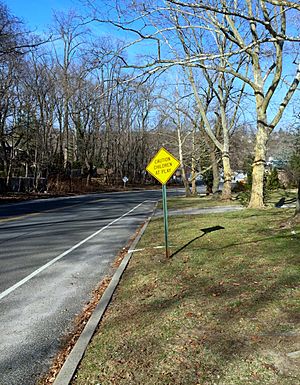 Grace Avenue, one of the busiest roads within Thomaston.

Other major roads within the village include Colonial Road, East Shore Road, Grace Avenue, and Shoreward Drive. A small portion of Middle Neck Road also passes through the village.

Part of the LIRR's Manhasset Viaduct is located within the village's boundaries.

Thomaston is served by the n20G, n20H, n21, n25, n26, and n57 bus routes, which are operated by Nassau Inter-County Express (NICE). All of these bus routes (excluding the n57) travel through the area via Northern Boulevard and Middle Neck Road.

The n57 bus route briefly passes through the village via. Gilchrest Road and Grace Avenue.

National Grid USA provides natural gas to homes and businesses that are hooked up to natural gas lines in Thomaston.

Additionally, the Manhasset–Lakeville Water District owns and operates a water tower within the village, known as the Thomaston Tank.

All content from Kiddle encyclopedia articles (including the article images and facts) can be freely used under Attribution-ShareAlike license, unless stated otherwise. Cite this article:
Thomaston, New York Facts for Kids. Kiddle Encyclopedia.