Brookville is a village located within the Town of Oyster Bay in Nassau County, on Long Island, in New York, United States. As of the 2010 United States Census, the village population was 3,465. 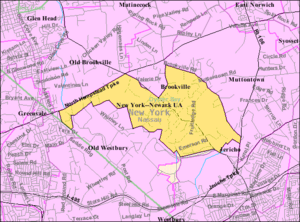 According to the United States Census Bureau, the village has a total area of 4.0 square miles (10 km2), all of it land.

The geographic Village of Brookville was formed in two stages. When the village was incorporated in 1931, it consisted of a long, narrow tract of land that was centered along Cedar Swamp Road (Route 107). In the 1950s, the northern portion of the unincorporated area then known as Wheatley Hills was annexed and incorporated into the village, approximately doubling the village's area to its present 2,650 acres (1,070 ha).

When the town of Oyster Bay purchased what is now Brookville from the Matinecocks in the mid-17th century, the area was known as Suco's Wigwam. Most pioneers were English, many of them Quakers. They were soon joined by Dutch settlers from western Long Island, who called the surrounding area Wolver Hollow, apparently because wolves gathered at spring-fed Shoo Brook to drink. For most of the 19th century, the village was called Tappentown after a prominent family. Brookville became the preferred name after the Civil War and was used on 1873 maps.

Brookville's two centuries as a farm and woodland backwater changed quickly in the early 20th century as wealthy New Yorkers built lavish mansions. By the mid-1920s, there were 22 estates, part of the emergence of Nassau's North Shore Gold Coast. One was Broadhollow, the 108-acre (0.44 km2) spread of attorney-banker-diplomat Winthrop W. Aldrich, which had a 40-room manor house. The second owner of Broadhollow was Alfred Gwynne Vanderbilt II, who was owner of the Belmont and Pimlico racetracks. Marjorie Merriweather Post, daughter of cereal creator Charles William Post, and her husband Edward Francis Hutton, the famous financier, built a lavish 70-room mansion on 178 acres (0.72 km2) called Hillwood. In 1931, estate owners banded together to win village incorporation to head off what they saw as undesirable residential and commercial development in other parts of Nassau County. In 1947, the Post estate was sold to Long Island University for its C. W. Post campus. The campus is noted as the home of the Tilles Center for the Performing Arts. Also in Brookville is the DeSeversky Conference Center of the New York Institute of Technology. The center was formerly Templeton, mansion of socialite and businessman Winston Guest. Templeton was later used as one of the settings for the Dudley Moore film Arthur.

The Chapelle de St. Martin de Sayssuel, also known as the St. Joan of Arc Chapel where Joan of Arc prayed prior to engaging the English, was moved from France to Brookville in the early 20th century. It was acquired by Gertrude Hill Gavin, daughter of James J. Hill, the American railroad magnate. The chapel was dismantled stone by stone and imported from France to her Brookville estate in 1926. The chapel is now located at Marquette University in Wisconsin.

The Brookville Reformed Church, one of the oldest existing church congregations in the country, calls Brookville its home. The Brookville Church was founded by 17th century Dutch settlers.

The James Preserve is a nature preserve in Old Brookville and is the only tract of land showing the natural appearance of the village before development. Although it is in Old Brookville, it is connected to Greenvale.

There were 631 households, out of which 49.9% had children under the age of 18 living with them, 82.9% were married couples living together, 4.9% had a female householder with no husband present, and 9.8% were non-families. 7.9% of all households were made up of individuals, and 4.6% had someone living alone who was 65 years of age or older. The average household size was 3.35 and the average family size was 3.49.

As of 2009, Brookville topped BusinessWeek's list of America's 25 wealthiest towns based on average income and net worth.[1]

The Long Island Lutheran Middle and High School is also located in the village.

Half of New York Institute of Technology's 1,050 acre Old Westbury campus is located in the Village of Brookville.

The village is the home of LIU Post, which is the largest campus of the private Long Island University system.

All content from Kiddle encyclopedia articles (including the article images and facts) can be freely used under Attribution-ShareAlike license, unless stated otherwise. Cite this article:
Brookville, New York Facts for Kids. Kiddle Encyclopedia.