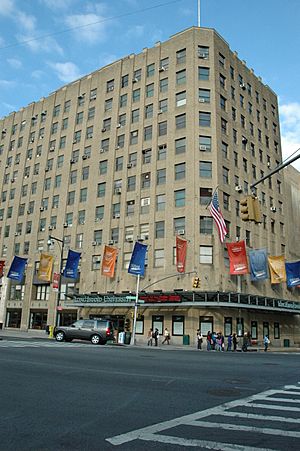 Long Island University is a private, coeducational university with campuses in Brooklyn and Brookville, New York. The Brooklyn campus is known as LIU Brooklyn, while the Brookville campus is branded as LIU Post (formal name: C. W. Post Campus of Long Island University). The university has about 24,170 students. It was founded at the Brooklyn location in 1926; the Post campus followed in 1954. The current president of the university is David J. Steinberg, Ph.D. .

The athletics teams of the university are called the LIU Sharks. Before the 2019–20 school year, the two LIU campuses operated separate athletic programs. The Brooklyn program, known at various times as "LIU" and "Long Island", and from 2013–14 as "LIU Brooklyn", competed in NCAA Division I under the final name of LIU Brooklyn Blackbirds, with most teams playing in the Northeast Conference (NEC). The Post program, known immediately before the merger as the LIU Post Pioneers, competed in NCAA Division II, primarily in the East Coast Conference. The university merged the two programs in July 2019, with some sports based in Brooklyn and others at Post. The new Sharks program inherited Brooklyn's Division I and NEC memberships. All varsity sports that had been sponsored by either campus before the merger continue to be sponsored by the current LIU program, and the university has added several more sports since the merger.

As of the upcoming 2020–21 school year, LIU will sponsor 31 NCAA teams, 12 for men and 19 for women, plus a varsity esports team outside of NCAA control. Most teams compete in the NEC, but LIU has many affiliations outside the NEC in sports not sponsored by that league:

All content from Kiddle encyclopedia articles (including the article images and facts) can be freely used under Attribution-ShareAlike license, unless stated otherwise. Cite this article:
Long Island University Facts for Kids. Kiddle Encyclopedia.