Kids Encyclopedia Facts
Not to be confused with Greenport, Columbia County, New York.

Greenport is a village in Suffolk County, New York, United States. It is on the north fork of Long Island. The population was 2,197 at the 2010 census.

The village of Greenport is within the town of Southold and is the only incorporated community in the town.

Greenport was a major port for its area, having developed a strong fishing and whaling industry in the past, although currently there are only a handful of commercial fishing vessels operating out of Greenport. More recently the tourism industry has grown substantially too, especially in the summer.

Greenport was first settled in 1682. The village was previously called Winter Harbor, Stirling, and Green Hill and was incorporated in 1838. Greenport was once a whaling and ship building village, and since 1844, has been the eastern terminal station on the north fork for the Long Island Rail Road. During Prohibition, rum running and speakeasies became a significant part of Greenport's economy. Greenport's residents knew the waters well and could outrun the coastguard. Restaurants on the east end, including Claudio's in Greenport, served the illegal booze. Many of the village's older structures are included in the Greenport Village Historic District, added to the National Register of Historic Places in 1986.

Town residents voted 617–339 in November 1994 to disband their nine-member police department. The department, which was established in 1947, was shut down following a grand jury investigation into a series of scandals. Since the shutdown, police services have been provided by the Southold Town Police Department. In 2005, trustees established a local chapter parapolice organization of volunteer vigilantes, Guardian Angels, to patrol the village.

There were 776 households, out of which 28.7% had children under the age of 18 living with them, 35.1% were married couples living together, 16.0% had a female householder with no husband present, and 42.5% were non-families. 34.9% of all households were made up of individuals, and 16.6% had someone living alone who was 65 years of age or older. The average household size was 2.42 and the average family size was 3.10. 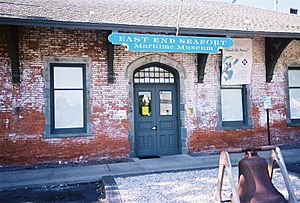 Greenport is also known for its tourism during the summer. It has a locally famous 1920s carousel, located near the waterfront. The village is also the home of the East End Seaport Museum & Marine Foundation, which hosts the annual Maritime Festival each September. The museum is housed in the former station house of the Greenport Long Island Rail Road station, while the East end of the Railroad Museum of Long Island is located in the former freight house. The new station is the terminus of the Long Island Rail Road.

Most of the tourism stems from maritime activities, as well as proximity to the more than 40 vineyards on the East End of Long Island. It has many small shops and boutiques, ice cream parlors, bed-and-breakfasts, and restaurants ranging from fine-dining to paper-napkin crab shacks.

Greenport proves to be the hub of the North Fork foodie culture with many acclaimed restaurants. Lucharito's, Noah's, The Frisky Oyster, The Blue Canoe and First and South all rank among new and acclaimed restaurants on the North Fork in the village. It is also the home of the Greenport Farmers' Market, the only multi-vendor cooperative local market on the North Fork. Greenport is also home to Claudio's Restaurant, Clam Bar and Crabby Jerry's, all three are located on the water and serve less upscale food. Claudio's Restaurant believes themselves to be the oldest single family-owned restaurant in the United States. 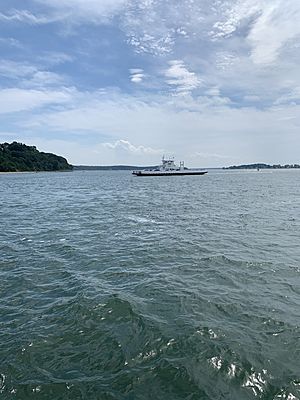 All content from Kiddle encyclopedia articles (including the article images and facts) can be freely used under Attribution-ShareAlike license, unless stated otherwise. Cite this article:
Greenport, Suffolk County, New York Facts for Kids. Kiddle Encyclopedia.