The Town of Southold is one of ten towns in Suffolk County, New York, United States. It is located in the northeastern tip of the county, on the North Fork of Long Island. The population was 23,732 at the 2020 census. The town also contains a hamlet named Southold, which was settled in 1640. 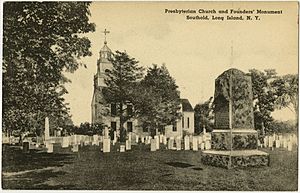 Algonquian-speaking tribes, related to those in New England across Long Island Sound, lived in eastern Long Island before European colonization. The western portion of the island was occupied by bands of Lenape, whose language was also one of the Algonquian languages.

In surrounding areas, the Dutch colonists had established early settlements to the northwest: on the upper Hudson River was Fort Orange, founded in 1615 (later renamed Albany by the English); and New Amsterdam (later renamed Manhattan) in 1625. Lion Gardiner established a manor on Gardiners Island in East Hampton in 1639. Just across from Long Island, the Connecticut Colony, or Connecticut River Colony, was established in 1636. The Puritans established New Haven Colony separately in 1638, even though it was largely surrounded by Connecticut Colony. New Haven Colony was a theocracy, governed only by church members.

English Puritans from New Haven Colony settled in Southold on October 21, 1640. They had purchased the land in the summer of 1640 from the group of Indians related to the Pequot of New England, who lived in the territory they called Corchaug (now Cutchogue). Settlers spelled the Indian name of what became Southold as Yennicott. In most histories Southold is reported as the first English settlement on Long Island in the future New York State. Under the leadership of the Reverend John Youngs, with Peter Hallock, the settlement consisted of the families of Barnabas Horton, John Budd, John Conklin, John Swazy, William Wells, and John Tuthill.

In 1650, the Treaty of Hartford established a boundary between Dutch and English claims roughly through Oyster Bay on the North Shore. The Dutch colony was the western part of Long Island, and the English dominated the east. The population of Southold at that point was about 180. The harbor at Greenport, on the North Fork, became important in trade, fishing, and whaling, because it rarely froze over. Settlers developed the interior land for agricultural purposes.

When the Dutch took control of the colony of New York in 1673, the English-settled eastern towns, including Southold, East Hampton, and Southampton, refused to submit; the Dutch attempted to force the matter by arms, and the colonists of the towns repelled them, with assistance from Connecticut. When New York was retaken by the English in 1674, these eastern towns preferred to stay part of Connecticut. Although Connecticut agreed, the government of James, Duke of York forced the matter for them to be part of the Province of New York. Governor Sir Edmund Andros threatened to eliminate the residents' rights to land if they did not yield, which they did by 1676. The Duke of York had a grudge against Connecticut. New Haven had hidden three of the judges who sentenced his father King Charles I to death in 1649.

The town called as its second minister Rev. Joshua Hobart, a Harvard graduate from Hingham, Massachusetts, and son of Rev. Peter Hobart. The latter was the founding minister of Old Ship Church, the nation's oldest church in continuous use. Rev. Joshua Hobart was installed in 1674 and served until his death in 1717, when he was 88 years old. Rev. Hobart's brother Josiah was one of the earliest settlers and initial trustees of East Hampton, Long Island, as well as High Sheriff of Suffolk County.

The name Southold is believed to be an elision of Southwold, a coastal town in the corresponding English county of Suffolk. John Youngs, the minister who was one of the founders of the Town, was born and brought up in Southwold, England. Youngs was a member of St. Margaret's Church in nearby Reydon. Within the Town's limits is an area known as Reydon Shores, perhaps a reference to the Reydon, England known by Youngs. The Town's name also may refer to a "holding" to the south [of New Haven]), from whence the original settlers hailed.

In the late 19th century, the Long Island Rail Road extended its line on the North Shore to Greenport. This enabled summer vacationers to travel to the destination by train. Due to the light on the North Fork from water on both sides, the area attracted many artists, including William Merritt Chase.

The area was agricultural, and long dominated by for potato farming. In the late 20th century, large areas of the North Fork were redeveloped as vineyards. This area of Long Island has developed a respectable wine industry. In November 1994, the village of Greenport voted to abolish its police department and contract with the Southold Town Police for law enforcement.

Significant coastal fish and wildlife habitats within the Town of Southold, include: the Mattituck Inlet Wetlands and Beaches, Fishers Island Beaches, Pine Islands and Shallows, the Goldsmith Inlet and Beach, Pipes Cove Creek and Moores Drain, the Dumpling Islands and Flat Hammock.

Southold Town, along with the rest of the East End, has a very rich cultural history. A handful of world-renowned artists have lived in the town including; Douglas Moore, Robert Berks, and Walt Whitman. Throughout the town there's countless art galleries and studios ranging all mediums of artistic expression. The town also has a rich community of musicians. Local music venue and restaurant, The Green Hill Kitchen, has seen performances from modern jazz greats such as Tommy Campbell (musician), Gil Goldstein, Alex Sipiagin, and Morris Goldberg.

All content from Kiddle encyclopedia articles (including the article images and facts) can be freely used under Attribution-ShareAlike license, unless stated otherwise. Cite this article:
Southold, New York Facts for Kids. Kiddle Encyclopedia.