Cutchogue is a hamlet and census-designated place (CDP) in Suffolk County, New York, United States. The population was 3,349 at the 2010 census.

The Cutchogue CDP roughly represents the area of the Cutchogue hamlet in the town of Southold. 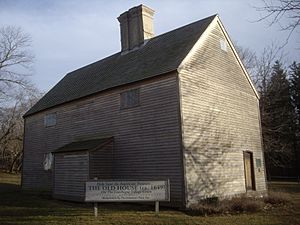 The c.1649 Old House, is one of the oldest houses in New York State

The name Cutchogue is derived from an Algonquin word meaning "principal place". Many of the local Native Americans lived at Fort Corchaug before English-American settlers began arriving in 1640. The Old House, built in 1649, is the oldest English-style house in the village. In fact, it is one of the best surviving examples of English domestic architecture in the United States, and it has been named a National Historic Landmark.

Demographics for the CDP 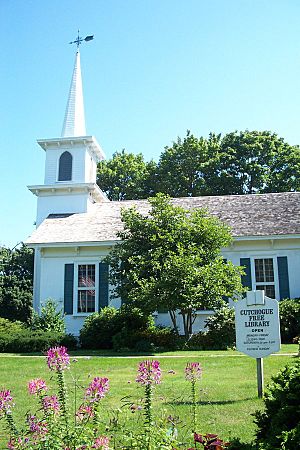 There were 1,120 households, out of which 27.6% had children under the age of 18 living with them, 62.3% were married couples living together, 6.7% had a female householder with no husband present, and 28.4% were non-families. 25.1% of all households were made up of individuals and 13.9% had someone living alone who was 65 years of age or older. The average household size was 2.48 and the average family size was 2.93.

An avid sailor, Albert Einstein once called Little Peconic Bay in Cutchogue "the most beautiful sailing ground I ever experienced." In the summers of 1938 and 1939 he rented a cottage on Old Cove Road, now called West Cove Road, on Nassau Point, and spent many hours alone in a little sailboat he called Tineff (Yiddish for "worthless"). Albert Einstein was taught to sail on Little Peconic Bay by two local brothers, Jack and Bob Fisher, who had a lot of patience getting him to become a successful yachtsman.

While in Cutchogue on August 2, 1939, pipe-smoking Einstein was visited by fellow Jewish physicists from Hungary Leó Szilárd (who had produced a nuclear chain reaction in a laboratory at Columbia University) and Edward Teller (both prompted by Niels Bohr), and dictated the famous Letter to President Roosevelt, alerting him to the new developments in nuclear physics and hinting that the Germans might be working on an atomic bomb, urging him to launch his own program. The letter is widely credited with setting in motion the Manhattan Project, the US government effort that built the first atomic bomb.

When Szilárd first explained the concept of a nuclear chain reaction to him, Einstein gave the famous reply, "Daran habe ich gar nicht gedacht!" ("I really never thought of that before").

All content from Kiddle encyclopedia articles (including the article images and facts) can be freely used under Attribution-ShareAlike license, unless stated otherwise. Cite this article:
Cutchogue, New York Facts for Kids. Kiddle Encyclopedia.