Shelter Island is a town and island at the eastern end of Long Island in the U.S. state of New York. It is part of Suffolk County, although it is separated from the rest of the county by water. The population was 2,392 at the 2010 census.

Shelter Island is nestled between the North and South Forks of Long Island. It is surrounded on three sides by Shelter Island Sound and on the fourth side by Gardiners Bay. It can be reached via ferry from Greenport to the north (approximately 8-minute trip) or from North Haven to the south (approximately 5-minute trip). New York State Route 114 runs through the island.

Shelter Island is around 8,000 acres (32 km2) in size. Vast tracts are protected wetlands, a nature preserve marshland. Nearly one-third of the island is owned by The Nature Conservancy to be preserved in a wild state. The Preserve has four nature and bird-watching trails, varying in length from 1.5 miles (2.4 km) to 11 miles (18 km), as well as a barrier-free Braille trail for the visually impaired.

There were 996 households out of which 20.3% had children under the age of 18 living with them, 56.1% were married couples living together, 7.2% had a female householder with no husband present, and 34.1% were non-families. 28.8% of all households were made up of individuals and 17.8% had someone living alone who was 65 years of age or older. The average household size was 2.24 and the average family size was 2.75.

The island was long inhabited by indigenous peoples, related to those who lived north of Long Island Sound. At the time of European encounter, it was occupied by the Manhanset tribe, an Algonquian-speaking people related to the Pequot and other Algonquians of New England.

Shelter Island was included in the original Plymouth Company land grant made by James I of England in 1620. On April 22, 1636, Charles I of England, told that the colony had not made any settlements yet on Long Island, gave the island to William Alexander, 1st Earl of Stirling. The grant gave Alexander all of Long Island and adjacent islands. Alexander gave James Farret power to act as his agent and attorney in colonizing Long Island. In reward Farret was allowed to choose 12,000 acres (49 km2) for his personal use. Farret chose Shelter Island and Robin's Island for his use. Farret in turn sold the islands to Stephen Goodyear, one of the founders of the New Haven Colony.

In 1651 Goodyear sold the island to a group of Barbados sugar merchants for 1,600 pounds of sugar. Nathaniel Sylvester (1610–1680), one of the merchants, was the island’s first white settler. He was among a number of English merchants who had lived and worked in Rotterdam (where he was born) before going to Barbados. His connections there and with the Netherlands helped him establish a far-flung trading enterprise. On March 23, 1652, he made the purchase official by agreement with Youghco (called Pogatticut), the sachem of the Manhanset tribe. The other owners, Sylvester’s brother Constant, and Thomas Middleton, never came to Long Island. In 1673 Nathaniel Sylvester claimed ownership of Shelter Island, Fishers Island, and other parts of Long Island. By that time the Manhansett had declined in number and power.

In 1652 Sylvester constructed a house on the island for his 17-year-old bride, Grissel (also spelled Grizzel) Brinley from London. Her mother was Anna (Wase) Brinley and her father Thomas Brinley had been an auditor in the court of King Charles I. With the Revolution he had lost his position; Grissel had gone to the colony with her older sister Anne, who had married William Coddington, the governor of the Rhode Island colony. Archeological research in the 21st century has revealed there may have been two early house complexes. The Sylvesters had eleven surviving children. The more elaborate manor house, which survives today, was built in 1733 by a Sylvester grandson.

The Sylvester estate was developed as a large provisioning plantation. It raised food crops, as well as livestock for slaughter, sending casks of preserved meats and other supplies to Barbados. Labor was provided by a multicultural force of American Indians, enslaved Africans and English indentured servants. Sylvester and his associates were part of the Triangle Trade between the American colonies (including the Caribbean), Africa and England. His descendants continued to use slaves on the plantation into the 19th century. An estimated 200 blacks are buried at the Negro Burying Ground on the North Peninsula.

The Sylvesters gave shelter to many persecuted Quakers. Sylvester Manor stands today, just off New York State Route 114, and is controlled by Sylvester descendants. All but about 24 acres of the original thousands of acres have gone into other hands.

Following the death in 1680 of Nathaniel Sylvester, Shelter Island was divided between his two sons, Giles and Nathaniel II. In 1695, William Nicoll, a resident of Islip, bought from Giles the area now called Mashomack Nature Preserve. Three years later, in 1698, another newcomer, George Havens, bought 1,000 acres (4.0 km2) from Nathaniel II. This parcel comprises what today is the Center; it stretched south to South Ferry and west to West Neck Creek. Over time these estates and parcels were split and divided by marriage and purchase, so that by the early 18th century, 20 families lived on Shelter Island. By order of the Provincial Government, the Town of Shelter Island was established in 1730. The community developed from there.

James Nicoll Havens, a member of the New York Provincial Congress, built a home on the island in 1743. He was the first town supervisor on the island. His former home is now owned by the local historical society.

Jonathan Nicoll Havens (1757–1799), born on Shelter Island, was a member of the First Continental Congress in 1774. He also served in New York’s delegation that in 1788 approved the federal constitution. Mashomack Forest (today Mashomack Nature Preserve) was owned by the Nicolls family for 230 years. Nicolls Creek was named for that family. A few Manhanset still lived in the wooded Sachem’s Neck area up until the 1790s.

The first ferryboat to serve the island was run by the Boisseau family at Stearns Point, nearby Crescent Beach. The North Ferry began service to Greenport in 1868. Throughout the 19th century, the island continued as a base for fishermen in the surrounding waters. Fish processing plants sent their products across the country. 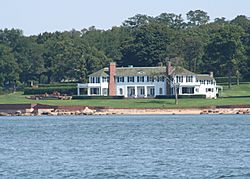 Shelter Island Heights was developed in 1871 as a summer resort for camp meetings, after a group of Brooklyn businessmen purchased the Frederick Chase estate for this purpose. It was developed by the Shelter Island Grove and Camp Meeting Association of the Methodist Episcopal Church. For eight years, the camp meetings took place on the island, before moving to Jamesport. During this time, Robert Morris Copeland designed the Union Chapel, built in 1875. In 1984 it was added to the National Register of Historic Places (NRHP).

Shelter Island Heights in total was a planned development by Copeland. The houses were designed in classic American styles: Stick-Eastlake, Queen Anne Style, and Colonial Revival. During the eight years from 1872 to 1880, when camp meetings were held here, about 70 summer cottages were built in the Heights. By 1890 the district was well-defined architecturally; the residences have not changed much since then. Shelter Island Heights was listed in 1993 as an Historical District on both the NRHP and the New York State Register of Historic Places.

At the turn of the 20th century, fish processing plants still operated on the island. One was located at the end of Burns Road, another on Big Ram Island, off what is today Tuthill Road. Some summer residents traveled here by steam ferries from New York City.

White Hill is located above the North Ferry landing in Shelter Island Heights. The Prospect Hotel was built on the hill. After it burned down, it was rebuilt, but was destroyed a second time by fire in 1942. Today the land where the hotel was located is a town park. 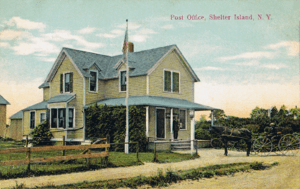 Francis Marion Smith (1846–1931) was known as the “Borax King” for his mining successes. Smith and his family bought a home on the island in 1892. He expanded it to more than 30 rooms and called his estate Presdeleau (French for "by the water"). By 1906 he owned more than 500 acres (2.0 km2) on the south side of the island. Smith Cove and Smith Street were named for him. Smith shipped in deer from California to hunt in his “deer park”; their descendants roam some areas of the island.The remains of his estate are reinforced concrete retaining walls and a "Japanese" footbridge from the garden, built by Ernest L. Ransome about 1898, behind Merkle Lane.

Another 19th-century millionaire who had an estate on Shelter Island was Artemas Ward (1848–1925), a pioneer in mass-market advertising. Ward made millions of dollars by monopolizing all advertising on New York City elevated trains, subways, and streetcars. Ward had a large estate on the south side of the island. Ward wrote a biography of his great-grandfather, Major General Artemas Ward (1727–1800), a commander in the American Revolutionary War. After years of being tied up in court, the vestiges of Ward’s original estate in the Shorewood section of the Island (including a manor house, formal Italian gardens, and a concrete water tower) have been renovated. In the case of the manor house, it has been partially "deconstructed" to restore an earlier version.

Following the Depression, some of the summer cottages were abandoned or left to rot. Recovery was slow. It was not until after World War II that summer residents started returning in larger numbers. During the 1950s a farm cooperative grew lima beans on the island. This was the last of commercial farming on Shelter Island.

In the 1960s and 1970s, more families started to move to Shelter Island as year-round residents. The Gerard family owned the property at Sachem’s Neck that had belonged to the Nicoll family for more than 200 years, and later to financier Otto Kahn. Developers eyed the 2,000 acres (8.1 km2). The land was purchased in January 1980 by the Nature Conservancy to preserve it as a nature park in perpetuity; half of the funds to buy the forest were raised on the island to create Mashomack Preserve.

There are still numerous Shelter Island residents with family roots dating to families here at the time of the American Revolution. Some summer residents are fifth-generation seasonal visitors.

Six places of worship are located on Shelter Island:

The Methodist camp, Camp Quinipet, is located at the northwestern tip of the island. It is used as a camp in the summer and as a retreat center for churches throughout the year.

All content from Kiddle encyclopedia articles (including the article images and facts) can be freely used under Attribution-ShareAlike license, unless stated otherwise. Cite this article:
Shelter Island, New York Facts for Kids. Kiddle Encyclopedia.