Belle Terre is a village in the town of Brookhaven on the North Shore of Long Island in Suffolk County, New York, United States. The population was 792 at the 2010 census.

The Belle Terre Club, an opulent private clubhouse that stood from 1906 to 1934

Throughout the 1700s and 1800s, the bulk of the peninsula was owned by the Strong family, who had their Oakwood estate in its Mt. Misery Neck section. The first known dwelling in contemporary Belle Terre was a shack constructed by an African-American affectionately known as Uncle Mott in the 1800s. This house was the subject of a painting by local artist William Moore Davis.

In 1902, the Port Jefferson Company purchased the Oakwood estate with the purpose of creating an exclusive waterfront development of fifty houses to rival the communities of Long Island's traditional Gold Coast. The well-connected real-estate developer, Dean Alvord, was chosen as president of Belle Terre's estates, which was incorporated in 1906. The construction of the Belle Terre Club, a grandiose private members club at the center of the community, also occurred in 1906. A pair of stately pergolas were constructed as well, which overlook the waterfront.

The Belle Terre Club was destroyed in a fire in 1934, the same year as the pergolas were deconstructed due to the financial burden of their upkeep. Due to a lapse in insurance coverage, the clubhouse was never rebuilt although a new country club opened in the Port Jefferson section of the Mt. Misery peninsula in 1956.

During the 1920s and 1930s, the community's residents staged a successful campaign against sand and gravel companies who began dredging operations in the area. Prior to these companies being ordered to cease operations in 1931, the Seaboard Sand & Gravel Company dredged a large cove near the tip of the peninsula. This is today known as Pirates Cove and is a popular feature of Port Jefferson Harbor among boaters.

For several decades prior to her death in 2014, Belle Terre was the principal home of Nadia de Navarro Farber, a Bulgarian-born countess (by her second of four marriages) who donated considerably to the John T. Mather Memorial Hospital in neighboring Port Jefferson Village. Farber alternated her residence between a landmark pink mansion near the tip of Belle Terre and her castle on the Caribbean island of Saint Croix. The pink mansion was featured prominently in the 1989 film She-devil.

According to the United States Census Bureau, the village has a total area of 0.9 square miles (2.3 km2), all of it land.

The village occupies the northeastern half of the Mt. Misery peninsula and overlooks both Port Jefferson Harbor and the Long Island Sound. All access to the village over land is from the neighboring village of Port Jefferson, which serves as Belle Terre's nearest commercial center and transit hub. 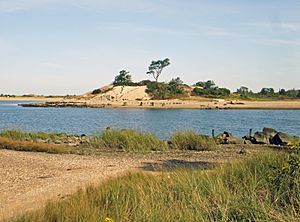 There were 286 households out of which 30.8% had children under the age of 18 living with them, 72.0% were married couples living together, 2.1% had a male householder with no wife present, 4.2% had a female householder with no husband present, and 21.7% were non-families. 15.7% of all households were made up of individuals and 9.4% had someone living alone who was 65 years of age or older. The average household size was 2.77 persons and the average family size was 3.10 persons.

Belle Terre is known for a law that evicted students from a nearby university campus, the State University of New York at Stony Brook, who were leasing shared housing in the village. In Village of Belle Terre v. Boraas, the United States Supreme Court, an opinion written by Justice William O. Douglas held that it was constitutional to forbid more than two people unrelated by blood, adoption, or marriage — not counting household servants — from living and cooking together as a single housekeeping unit in the village for the purpose of maintaining a quiet residential sector.

All content from Kiddle encyclopedia articles (including the article images and facts) can be freely used under Attribution-ShareAlike license, unless stated otherwise. Cite this article:
Belle Terre, New York Facts for Kids. Kiddle Encyclopedia.