An artificial lake, "mere" or boating lake was created where there had once been an Elizabethan shipping haven that had silted up. Many of the inspirations for the Meare came from a personal friend of the Ogilvies, J. M. Barrie, who wrote Peter Pan. Along with a large main pond, there are several channels with landings marked with names from the Peter Pan stories. Tiny islands on the Meare contain locations found in the novel, such as the pirates' lair, Wendy's house, and many others, where children are encouraged to play. The Meare was dug to a shallow depth for safety reasons.

A variety of boats can be rented to enjoy the water, many of them originals dating from the creation of the Meare and named by the local workmen who had dug the lake.

In August, the Meare serves as the location for the Thorpeness Regatta which usually takes place around the same time as the carnival in neighbouring Aldeburgh and attracts many visitors. During the day, boat races are held, and at night, boats that have been decorated are paraded around the Meare. This is followed by a grand fireworks display. 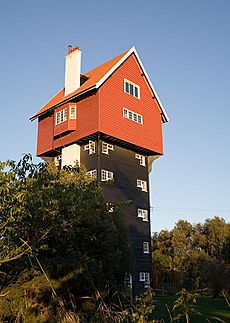 The House in the Clouds is an unusual house, converted from a water tower in 1923.

Thorpeness is a quiet village of about 400 people in the winter, increasing to over 1,600 in the summer holiday season. Apart from the events centred on the Meare at the end of August, it is also a popular destination with day trippers, for its beach, amenities, and sights such as The House in the Clouds.

The landowning Ogilvie family, who began to buy into the area in 1859, still have a strong presence in the village. Many of those holidaying in the village have been doing so for generations. Many of the families of the craftsmen who helped to build the village still live there. Thorpeness was listed as the Weirdest Village in England by Bizarre magazine in 2003.

To the south of the village lies the North Warren RSPB reserve, an area of wildlife and habitat conservation and nature trails run by the Royal Society for the Protection of Birds. It has Site of Special Scientific Interest (SSSI) and Special Protection Area (SPA) status.

Like much of the East Coast, Thorpeness has had intermittent problems with coastal erosion. Discussions are still underway for further defences.

Sophie Lascelles, who was born in the village in 1973, is a professional photographer of note. She is a great-great-granddaughter of King George V.

All content from Kiddle encyclopedia articles (including the article images and facts) can be freely used under Attribution-ShareAlike license, unless stated otherwise. Cite this article:
Thorpeness Facts for Kids. Kiddle Encyclopedia.