Crosse & Blackwell is a British food production company that has been in existence since 1706.

Jackson's, a colonial produce business, was established in London in 1706, later becoming West & Wyatt and specialising in pickles, sauces and condiments, plus salted fish, and it held Royal appointments to George III, George IV and William IV. Described as "oilmen and salters," West & Wyatt had factory premises at 11 King Street (now Shaftesbury Avenue) in Soho in 1818, packaging and supplying sweet oils, foods preserved in oil, and crystallised fruits and preserves.

By 1839 the company had expanded and moved its offices and shop to 20-21 Soho Square. During the following decade, it pioneered the use of celebrity chefs as endorsers and collaborators, working with Alexis Soyer from 1850 to create the tangy Soyer's Sauce, Soyer's Relish and Soyer's Sultana Sauce products. It was also a wholesaler of Lea & Perrins Worcestershire sauce.

Crosse & Blackwell opened a vinegar brewery in Caledonian Road and started pickle packing at Soho Square (described by Henry Mayhew in his 1865 book The Shops and Companies of London, and the Trades and Manufactories of Great Britain, in a report entitled 'Girls in Pickle'). Crosse & Blackwell also acquired a small Bermondsey canning firm, Gamble & Company, established in 1812 (as Donkin, Hall and Gamble) to produce preserved fruit, vegetables and meat to supply long distance vessels. In 1849, the company also established a plant in Cork, Ireland to produce canned salmon.

Before World War I, Crosse & Blackwell (a limited company since 1892) established its first factory in continental Europe, in Hamburg. After the war, it acquired another Bermondsey-based business, sauce and pickle maker E Lazenby & Son Ltd, in 1919, and Dundee-based marmalade manufacturer James Keiller & Son Ltd in 1924. The latter had a factory at Tay Wharf in east London's Silvertown district, close to the River Thames, rail links and Henry Tate's sugar refinery. 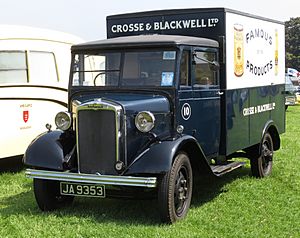 In 1920, Crosse & Blackwell made a successful £612,856 bid to acquire a factory site in Branston, just outside Burton upon Trent, which they pledged to turn into the largest and best-equipped food preserving plant in the British Empire. This allowed the company to vacate its Soho properties (nearly 100 years later the Soho Square premises were the subject of an archaeological investigation during construction of the London Crossrail project).

In 1922 they started to produce Branston Pickle (to a recipe attributed to Mrs Caroline Graham and her daughters Evelyn and Ermentrude) at their new factory, but this factory proved uneconomic and production was moved to the Lazenby site in Crimscott Street, Bermondsey. Production at Branston ended in January 1925, leading to large scale local unemployment, and many local people boycotted Crosse & Blackwell products as a result.

The Bermondsey site was expanded with new buildings in 1924 and 1926 and remained in use until 1969.

The Keiller factory in Silvertown had been destroyed in an 1889 fire and rebuilt the following year. It continued manufacture of preserves, chocolates and confectionery until it was again destroyed, this time bombed during the first daylight air raid on London on 7 September 1940. Chocolate and confectionery work was transferred to Dundee, but preserves manufacture was eventually restarted. This then transferred to Dundee in 1956.

In 1960, Nestlé bought the Crosse & Blackwell Group and developed the name across a number of food categories worldwide. The acquisition increased Nestlé's output (adding 11 factories) and included the largest fish-canning factory in the UK (located in Peterhead, Aberdeenshire). Crosse & Blackwell employed 4,700 workers in production and 1,900 other employees and salespeople at the time of the acquisition. The brand was later owned by Premier Foods.