Piccalilli, or mustard pickle, is a British interpretation of South Asian pickles, a relish of chopped and pickled vegetables and spices. Regional recipes vary considerably.

The Oxford English Dictionary traces the word to the middle of the 18th century when, in 1758, Hannah Glasse described how "to make Paco-Lilla, or India Pickle". An apparently earlier reference is in Anne Blencowe's Receipt Book, written c. 1694, which has "To Pickle Lila, an Indian Pickle" credited to Lord Kilmory.

The more familiar form of the word appears in 1769, in Elizabeth Raffald's The Experienced English Housekeeper, as "To make Indian pickle, or Piccalillo". Richard Briggs, in his 1788 The English Art of Cookery, similarly calls it "Picca Lillo". The spelling "piccalilli" can be seen in an advertisement in a 1799 edition of The Times. 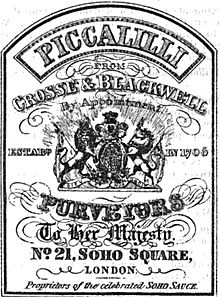 Piccalilli label as used by Crosse & Blackwell around 1867

British piccalilli contains various vegetables—regularly cauliflower, onion, and gherkin—and seasonings of mustard and turmeric. A more finely chopped variety "sandwich piccalilli" is also available from major British supermarkets. It is used as an accompaniment to foods such as sausages, bacon, eggs, toast, cheese, and tomatoes. It is usually used to accompany a dish on a plate rather than as a bread spread. It is popular as a relish with cold meats such as ham and brawn, and with a ploughman's lunch. It is produced both commercially and domestically, being a traditional mainstay of Women's Institute and farmhouse product stalls.

An unsweetened variation of British piccalilli is found in Cyprus (including northern Cyprus). It is without baby onions, with a milder mustard sauce, and with the addition of carrot pieces. Piccalilli is known in Cyprus as πίκλα (pikla) in Cypriot Greek, and bikla in Cypriot Turkish. It is served as a condiment, and occasionally as a meze dish.

In the Northeastern United States, commercial piccalillis are made with a base of sweet peppers or green tomatoes. This style is somewhat similar to sweet pepper relish, with the piccalilli being distinguished by having a darker red or green color and, like British piccalilli, the chunks are larger and it is slightly sweeter. It is a popular topping on such foods as hamburgers and hot dogs. Traditional, British-style, yellow, piccalilli is also available.

In the Midwestern United States, commercial piccalillis are based on finely chopped gherkins. Bright green and on the sweet side, they are often used as a condiment for Chicago-style hot dogs. This style is sometimes called "neon relish".

In the Southern United States, piccalilli is not commonly served. In its place, chow-chow, a relish with a base of chopped green (unripe) tomatoes, is offered. This relish may also include onions, bell peppers, cabbage, green beans, and other vegetables. While not exactly similar to other piccalillis, chow-chow is often called as such and the terms may be used interchangeably.

In the Western United States, piccalilli is uncommon.

A far spicier variant of piccalilli comes from the former Dutch colony of Suriname, where traditional British piccalilli is mixed with a sambal made of garlic and yellow Madame Jeanette peppers. This piccalilli is often homemade but can also be bought in jars in Dutch corner shops. Whilst Surinamese piccalilli is similar in appearance to ordinary piccalilli, the taste is much spicier.

All content from Kiddle encyclopedia articles (including the article images and facts) can be freely used under Attribution-ShareAlike license, unless stated otherwise. Cite this article:
Piccalilli Facts for Kids. Kiddle Encyclopedia.