Branston is an English food brand best known for the original Branston Pickle, a jarred pickled chutney first made in 1922 in the village of Branston near Burton upon Trent, Staffordshire by Crosse & Blackwell. The Branston factory proved to be uneconomical, and production was moved to Crosse & Blackwell subsidiary, E Lazenby & Sons in Bermondsey, London, where it invested in new buildings in 1924 and 1926, which remained in use until 1969.

In 2004, the pickle business was sold by Nestlé to Premier Foods and production was moved to Bury St Edmunds in Suffolk. Premier Foods sold the brand to Mizkan in 2013, at which time it ceased to be labelled as Crosse and Blackwell because in Europe this name was sold separately to Princes Group. Over 17 million jars a year are sold in the UK. 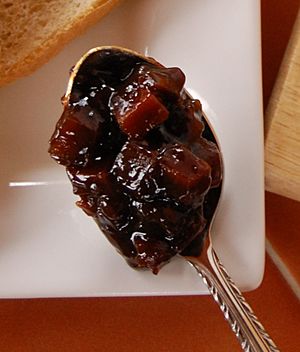 Branston Pickle is made from a variety of diced vegetables, including swede (rutabaga), carrots, onions and cauliflower pickled in a sauce made from vinegar, tomato, apple and spices. In recent years high-fructose corn syrup has replaced sugar in the product sold in the American market. Sugar is still used in the British version.

Branston Pickle is sweet and spicy with a chutney-like consistency, containing chunks of vegetables in a thick brown sticky sauce. It is commonly served as part of a ploughman's lunch, a popular menu item in British pubs. It is also frequently combined with cheddar cheese in sandwiches, and many sandwich shops in the UK offer cheese and pickle as an option. It is available in the standard 'chunky' version, as well as a 'small chunk' variety, and a 'smooth' variety that is pureed, which are easier to spread onto bread. Convenient squeeze-bottle packs are also in the range, along with a 'smooth' recipe. Branston also has flavoured pickles including Sweet Chilli and Beetroot flavoured pickle.

In October 2005, Premier Foods launched Branston Baked Beans. The marketing and promotion of this product was aimed at challenging Heinz's dominance of the UK baked bean market. This marketing included an advert, featuring a Branston Bean Tin explaining how Branston Beans are very "saucy". Promotional activities included a 'Great British Bean Poll' where members of the public across the country were invited to blind taste both 'the brand leader' (assumed to be Heinz) and Branston. In the poll, 76% of participants picked Branston over the brand leader. Heinz elected to change their recipe in the face of this aggressive activity.

Around November 2015, a sweet chili-flavoured pickle was launched, and the brand's rich and fruity sauce was re-launched, along with two new sauce flavours, rich and spicy and rich and smoky. In 2017, Branston launched its tomato ketchup, mayonnaise and brown sauce lines in single-serving sachet packaging.

Walkers once produced a variety of crisps called "Cheese and Branston Pickle". 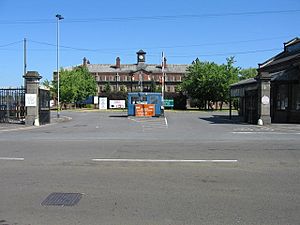 In late 2012, it was announced that as part of an aggressive debt reduction strategy, Premier Foods would be selling the Branston brand to Japanese food manufacturer Mizkan Group for £92.5 million, joining Sarson's vinegar and Hayward's pickled onions as recent Premier Foods to Mizkan brand acquisitions. The Bury St Edmunds plant continues to manufacture Branston products.

Availability outside the UK

All content from Kiddle encyclopedia articles (including the article images and facts) can be freely used under Attribution-ShareAlike license, unless stated otherwise. Cite this article:
Branston (brand) Facts for Kids. Kiddle Encyclopedia.