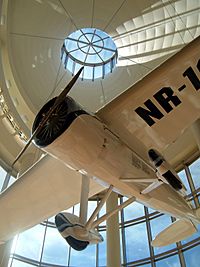 A replica of Oklahoma aviator Wiley Post's Winnie Mae hangs in the atrium of the Oklahoma History Center.

The Oklahoma History Center (OHC) is the history museum of the state of Oklahoma. Located on an 18-acre (7.3 ha) plot across the street from the Governor's mansion at 800 Nazih Zuhdi Drive in Oklahoma City, the current museum opened in 2005 and is operated by the Oklahoma Historical Society (OHS). It preserves the history of Oklahoma from ancient Native American tribal nations to the present day.

The OHC was founded in 1893 by members of the Territorial Press Association in Guthrie, Oklahoma, then the capital of Oklahoma Territory, but moved to Oklahoma City after statehood was declared in November 1907.

The Learning Center covers 215,000 square feet (20,000 m2). The OHC is affiliated with the Smithsonian Institution, the National Archives, and is accredited by the American Alliance of Museums.

The OHC opened an in-house restaurant, "Farmstead Cafe," which features locally-made fresh baked goods including gluten-free items, soups, salads, sandwiches and roasted coffees from 10 a.m.–2 p.m., Monday–Saturday. It is modeled after its parent, the Farmstead Cafe of Luther, Oklahoma.

The Inasmuch Foundation Gallery is located on the south end of the first floor. The gallery explores the breadth of Oklahoma's artistic achievements as well as the impact of a diverse immigrant population. Visitors will enjoy a broad range of subjects, including Cowboys and Indians as entertainment, the state's pioneering innovations in broadcasting, and the unifying impact sports and sporting events have made on Oklahoma communities.

The ONEOK Gallery is located on the north end of the first floor. Representing all 39 American Indian tribes currently associated with Oklahoma, the ONEOK Gallery offers visitors the opportunity to explore the traditional historic past of native peoples of Oklahoma as well as experience contemporary Indian cultures. Using modern-day Indian experience as a bridge between the past and the present, the exhibit offers artifacts, tribal music, photographic images, Indian art, and oral histories from the Indian tribes of Oklahoma.

The Kerr-McGee Gallery is located on the south end of the third floor. The gallery offers a rich history of Oklahoma from oil and gas exploration to the state's military contributions since the first expeditions by the Spanish in the 16th century. Visitors can enjoy numerous artifacts including items from an 1830s riverboat recently excavated from the Red River, examples of Oklahoma's entrepreneurial history, and a 3-D reconstruction of an oil derrick.

The Noble Foundation Gallery is located on the north end of the third floor. Land runs and lotteries have played an enormous role in the development and settlement of the state. Through artifacts, images, and first-hand accounts of participants, visitors can relive the lives of those who settled the Great Plains and turned homesteads into farms and cities.

Rock & Roll Exhibit - In 2009, the Oklahoma History Center hosted "Another Hot Oklahoma Night: A Rock & Roll Exhibit", a title that comes from the lyrics of a song by Oklahoma-born musician Michael Been. This exhibit explored the rock and roll artists, radio stations, personalities, venues, and fans that have called Oklahoma home. Beyond the facts of each story, the exhibit showed how growing up in Oklahoma affected the music. These were displayed in an innovative style to encourage visitor participation and to ensure that the visitor would take away a new perspective on the history of rock and roll in Oklahoma. The exhibit was located in the E. L. & Thelma Gaylord Gallery on the extreme north end of the first floor. Additional exhibit components were located in the Inasmuch Foundation, Noble Foundation, and Kerr-McGee Galleries. This exhibit closed in 2011.

Tierra De Mi Familia - On November 22, 2008, the Oklahoma History Center opened a museum exhibit sharing the Latino experience in Oklahoma. The interactive exhibit used interviews, artifacts, documents, photographs, film, and music to explore both the impact of Latinos on the state of Oklahoma and the impact of the state of Oklahoma on the lives of Latinos. The exhibit integrated two story lines; the historical immigration of Latinos to Oklahoma, from territorial days to present, and the cultural folkways that Oklahoma's Latino people have brought with them from Central America, Mexico, the Caribbean, and South America.

Oklahoma is home to cultures from all over the world, a unique blend of people that call Oklahoma their home. This exhibit provided a place to tell these immigration stories, a place to share and begin to understand and learn about the diversity of the state of Oklahoma. This exhibit closed in 2012.

Oklahoma's Apollo 11 Moon Rock and Apollo 17 Goodwill Moon Rock- Rose Niang-Casey, a graduate student at the University of Phoenix, and a participant in the "Moon Rock Project", was assigned the task of hunting down the Oklahoma Apollo 11 moon rock and Apollo 17 Goodwill Moon Rock, two moon rocks the Nixon Administration gave to the people of Oklahoma. In both cases she discerned these moon rocks were properly on display at the Oklahoma History Center in Oklahoma City. She advised this is an exception to the rule, as most of these unique gifts that were given to the states and nations of the world have been poorly handled over the years.

Oklahoma State Level History Day Competition - Each year, the Oklahoma History Center hosts the second of a three-stage (district, state, and national) competition called National History Day. Middle- and high school students can enter documentaries, historical papers, websites, exhibit boards, or performances on a topic that the students choose that relate to each year's theme. Students' projects are judged and advance to the national competition if they place first or second in their category.

All content from Kiddle encyclopedia articles (including the article images and facts) can be freely used under Attribution-ShareAlike license, unless stated otherwise. Cite this article:
Oklahoma History Center Facts for Kids. Kiddle Encyclopedia.