Yankton is a city in and the county seat of Yankton County, South Dakota, United States.

Yankton had a population of 14,454 at the 2010 census and it is the principal city of the Yankton Micropolitan Statistical Area, which includes the entirety of Yankton County and which had an estimated population of 22,662 as of July 1, 2017. As the first capital of Dakota Territory, it was named after the Yankton tribe of Western Dakota people; Yankton is derived from the Dakota word I-hank-ton-wan ("the end village").

Yankton is located on the Missouri River just downstream of the Gavins Point Dam and Lewis and Clark Lake, and just upstream of the confluence with the James River. The United States National Park Service's headquarters for the Missouri National Recreational River are located in the city. The Human Services Center was established as a psychiatric hospital in 1882 and is on the National Register of Historic Places.

Yankton is commonly referred to as the "River City", due to its proximity to the Missouri River and the importance the river played in the city's settlement and development. Yankton has also earned the nickname "Mother City of the Dakotas", due to the early important role it played in the creation and development of the Dakota Territory, which later became the 39th and 40th U.S. states of North and South Dakota.

Owing to the early exploitation of Fort Hays Limestone for cement manufacture, including shipment of cement to the construction of the Panama Canal, Yankton once also had the nickname "Cement City". 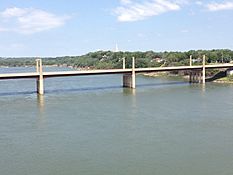 A view of Yankton, South Dakota from the Meridian Pedestrian Bridge, showing the Missouri River, Discovery Bridge and the steeple of the Bishop Martin Marty Chapel.

The site of Yankton was occupied by the Yankton Sioux (Nakota) prior to the arrival of European settlers. As part of the vast Louisiana Purchase, the site of Yankton was visited by Lewis and Clark in 1804. In the journals of the expedition, the explorers write of a meeting on August 30, 1804 with members of the Yankton Sioux Tribe on a Missouri River bluff presently known as Calumet Bluff. As recently as 1857, the present day site of Yankton was occupied by a village of Yankton Sioux led by Chief Pa-le-ne-a-pa-pe ("Struck by the Ree"). Two years later, with the signing of the Yankton Treaty of 1858, the land was opened for settlement. The city was founded where the small Rhine Creek (renamed Marne Creek in World War I) flowed into the Missouri River. The city grew as a stop for steamboats to take on fresh water and supplies, especially after steamboat traffic boomed when gold was discovered in the Black Hills. 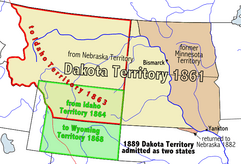 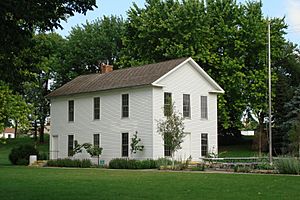 With two days left in his term, President James Buchanan signed a law on March 2, 1861 creating Dakota Territory. Yankton was designated as the territorial capital, and newly inaugurated President Abraham Lincoln appointed his personal physician, William A. Jayne of Springfield, Illinois, as the first territorial governor. The territorial capitol building, a plain, two-story wooden structure, was located at the intersection of Fourth and Capitol Streets; the original structure has been demolished, but a replica of the building has been constructed in Yankton's Riverside Park. Yankton served as the territorial capital until 1883 when the capital was moved to Bismarck (presently in North Dakota).

In response to the Dakota War of 1862 in western Minnesota, Governor Jayne issued a proclamation on August 30, 1862 requiring every male between the ages of 18 and 50 in every settlement in eastern Dakota, be formed into militias to protect against expected attacks from the Native Americans. In response, the Yankton militia built a stockade at the corner of Third Street and Broadway Avenue of approximately 200,000 square feet. Settlers from the surrounding area, and as far away as Sioux Falls and Bon Homme County, fled to Yankton in order to seek shelter in the structure. Although roving bands of Native Americans did approach Yankton over the course of several weeks, no attack ensued, and the stockade was eventually abandoned and torn down. Although no remnants of the stockcade remain, a monument can now be found at the site of the stockade memorializing this event.

Among the most notable events that occurred in Yankton while capital, Jack McCall, murderer of Wild Bill Hickok in Deadwood on August 2, 1876, was tried in Yankton for Hickok's murder, found guilty, and was hanged on March 1, 1877 at the age of 24. His body is buried in a Yankton cemetery. 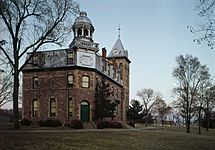 The conservatory building on the former Yankton College campus - now a federal prison.

Due to the urging of the Reverend Joseph Ward of Yankton, the General Association of Congregational Churches in Dakota Territory voted in May 1881 to establish "Pilgrim College" in Yankton, which was to be the first private institution of higher learning in Dakota. When the college was incorporated in August 1881, the name had been changed to "Yankton College". Classes commenced in October 1882, and Yankton College played a prominent role in the city for over 100 years. Then, in 1983, the small liberal arts college was forced to close due to financial insolvency. After remaining vacant for several years, the historic campus, which is listed on the National Register of Historic Places, was purchased by the United States Federal Bureau of Prisons for use as a minimum security prison. The Federal Prison Camp – Yankton houses approximately 850 male inmates.

Since its founding, Yankton enjoyed a natural advantage as a steamboat landing along the Missouri River due to the fact that its landing stretched along the entire length of the town’s riverfront. The first steamboat to reach Yankton from St. Louis arrived in 1859, providing goods and supplies to settlers and fur-traders in upper and central Dakota. After that, the city continued to grow, particularly after gold was discovered in the Black Hills in 1874 and prospectors rushed into Dakota Territory. By 1880, Yankton had become an established riverboat port on the Missouri River, but the city’s status as an important port was literally crushed on March 27, 1881 when an ice dam on the Missouri River burst, sending flood waters and giant blocks of ice flowing towards the town. 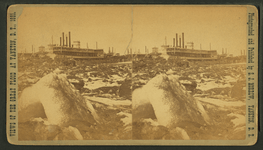 A view of Yankton's riverfront after the flood of March 1881.

The resulting flood waters continued to accumulate behind the debris, and by March 29, the town’s riverfront and downtown were covered in water, ice and rock, destroying or stranding several riverboats that were moored there. As a result of this flood, and the expansion of railroads as a preferred method of shipping goods (the railroad reached Yankton in 1872, and the rest of Dakota throughout the 1870s), Yankton’s river boat traffic was reduced, and the city’s role as a prominent stopping point on the way west dwindled over the next several years.

In 1882, the Human Services Center was established as a psychiatric hospital. On June 2, 1883, Dakota Territory Governor Nehemiah G. Ordway moved the territorial capital from Yankton to Bismarck, present-day North Dakota.

A Sample of Historic Structures in Yankton, South Dakota

As evidence of its rich historical past, Yankton has 26 individual properties and 6 historic districts within the city listed on the National Register of Historic Places, maintained by the U.S. National Park Service. Each individual district contains several structures, and include:

The City of Yankton maintains fourteen municipal parks, including Fantle Memorial Park, which is the location of an outdoor public swimming pool, and Riverside Park, which is home to the city’s Riverside Baseball Field. There are two golf courses in the city: the Fox Run municipal golf course, and the private golf course located at Hillcrest Golf and Country Club. The City of Yankton and the Yankton School District jointly maintain and operate the Yankton High School and Summit Activities Center; this facility offers an indoor swimming pool, several gymnasiums, and a public weight lifting room.

The double-decker Meridian Bridge over the Missouri River was decommissioned for traffic in October 2008 after the new Discovery Highway Bridge was opened. This old bridge was converted to a pedestrian bridge (photo), and is part of the city’s extensive pedestrian and bicycle path system. The Brokaw-Auld Trail is a linear park and recreational path along Marne Creek, and the State of South Dakota has developed trails and paths to and throughout the Lewis and Clark Recreation Area.

The Discovery Bridge at night.

U.S. Route 81 serves the city as a north–south highway that connects the city with Nebraska across the Missouri River to the south via the Discovery Bridge, which replaced the Historic Meridian Highway Bridge in 2008. Interstate 90 is approximately 65 miles north of the city, and Interstate 80 is about 160 miles south of the city, via U.S. Route 81. U.S. Route 81 is also signed as Broadway Avenue within city limits.

South Dakota Highway 50 serves the city as an east–west highway and includes a four-lane divided highway that connects the city to Interstate 29, approximately 33 miles to the east.

South Dakota Highway 52 connects the city to the Lewis and Clark Lake area, about four miles to the west.

Yankton is also home to the Dakota Territorial Museum, which is located in West Side Park, and which contains information and artifacts about the heritage and development of the City of Yankton and the surrounding area. The museum’s collection includes artifacts of Dakota Territory, Native American inhabitants and early pioneers. The museum complex also contains several outbuildings, such as a restored rural school house and the Great Northern Railway Depot. The museum also displays a retired Burlington Northern Railway caboose. The museum has announced plans to purchase and rehabilitate the Mead Building on the grounds of the Human Services Center, to be used as the new site of the museum and its collections.

The abandoned Mead Building on the South Dakota Human Services Center campus in Yankton has been identified as the future site of the Dakota Territorial Museum.

Yankton's Riverboat Days is an annual celebration held in the third full weekend in August that attracts 135,000 people. The primarily free event hosts over 150 artists and over 50 food vendors at Riverside Park. Other activities include a rodeo, parade, golf tournament and snowmobile grass drag race.

Yankton is mentioned numerous times as the territorial capital in the western TV series Deadwood.

Yankton was mentioned in a 2015 episode of The Middle, Hecks on a Train.

Yankton was once home to Yankton College; founded in 1881, it was the first liberal arts college in the Dakota Territory. The college closed in 1984. The campus was acquired by the Federal Bureau of Prisons in 1988 for use as the Federal Prison Camp – Yankton.

All content from Kiddle encyclopedia articles (including the article images and facts) can be freely used under Attribution-ShareAlike license, unless stated otherwise. Cite this article:
Yankton, South Dakota Facts for Kids. Kiddle Encyclopedia.