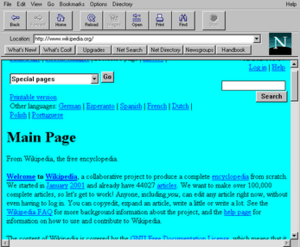 Netscape Navigator (or just Netscape) was a closed source web browser between 1994 to 1998. In 1999, they made it open source. It was first released in 1994. It was very popular during the 1990s. In 1998, Internet Explorer gained more market share, due to Microsoft bundling Internet Explorer with Windows 98. Netscape Communications Navigator Version 0.9B (Mosaic Netscape Navigator 0.9b) got released in June 13, 1994-present (at dejavu.org/1994win.htm).

All content from Kiddle encyclopedia articles (including the article images and facts) can be freely used under Attribution-ShareAlike license, unless stated otherwise. Cite this article:
Netscape Navigator Facts for Kids. Kiddle Encyclopedia.