Babbitt is a neighborhood in North Bergen Township in Hudson County, New Jersey, United States. The area, located west of Tonnelle Avenue within the New Jersey Meadowlands District, is home to light manufacturing, warehouses, transportation facilities, and part of the wetlands preservation area known as the Eastern Brackish Marsh.

The name is taken from the company that produced Babbitt's Best Soap, named after its founder, Benjamin T. Babbitt. In 1904 the company purchased a tract of 87 acres (35 ha) between Granton and Faiview, and in 1907 relocated from its former premises, a 22,000 square feet (2,000 m2) facility on West Street in Lower Manhattan. to what was then one of the largest soap manufacturering plants in the world. Sinclair Lewis's novel Babbitt about an industrialist used the surname. 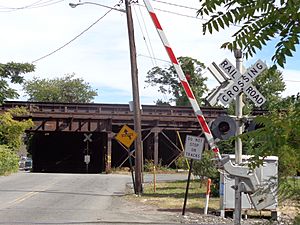 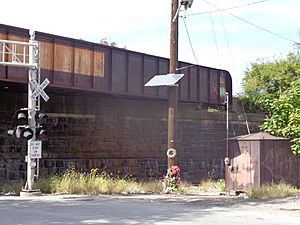 The Northern Branch Corridor passes under CSX River Division at 83rd Street, which is slated for closure if the HBLR extension is built.

The West Shore Railroad, the Erie Railroad's Northern Branch, and the New York, Susquehanna, and Western (NYSW) all passed through the area running parallel to each other. Both Erie and NYSW maintained minor stations nearby 83rd Street, which crossed under the right-of-way of the West Shore. Granton Junction was located just south of the stations and was where NYSW and Erie converged after the latter had also passed under the West Shore. For a time Granton was busy railroad junction used by both the Erie and NYSW, which shared track and stations, including the Susquehanna Transfer. The name Granton comes from a former quarry that later was site of an important fossil find of a phytosaur. Joint operations between the Erie and NYSW were controlled by GR Tower, which in 1959 was destroyed by fire, ending the relationship. Originally the soap works were outftted with rail spurs by the NYSW, but by 1909 they had been removed in a renegade action in which factory workers where locked-up and the tracks removed and hauled away. In August 1922, a full Sunday evening Erie train heading south to Pavonia Terminal was struck by bombs thrown at it in what was considered an act of sabotage and an attempt to cause a collision.

The West Shore subsequently became Conrail's River Line, and eventually the CSX River Subdivision which begins to the south at North Bergen Yard. Road access to its Little Ferry Yard is located in Babbitt.

The Hudson-Bergen Light Rail extension into eastern Bergen County known as the Northern Branch Corridor Project calls for the closure of the at-grade crossing at 83rd Street and creation of a new one at 85th Street.

All content from Kiddle encyclopedia articles (including the article images and facts) can be freely used under Attribution-ShareAlike license, unless stated otherwise. Cite this article:
Babbitt, North Bergen Facts for Kids. Kiddle Encyclopedia.