Harrison is a town in Hudson County, New Jersey, United States. It is a suburb of the nearby city of Newark, New Jersey.

The area that is now Harrison was a part of a charter granted to Captain William Sandford of Barbados. New Barbadoes Neck consisted of 30,000 acres (120 km2) and extended north from Newark Bay to present-day Rutherford, between the Passaic and Hackensack Rivers. Sandford sent his nephew, Major Nathanial Kingsland, to enter into an agreement for the purchase the land from the Unami Native Americans, a branch of the Leni Lenape.

In 1755, the first steam engine in North America was set up at the Schuyler Copper Mine in what is now North Arlington to help drain water from the mine.

A road to the Hudson Waterfront was completed in 1750, named for Douwe's Ferry which it met at its eastern end to cross the Haceknsack River. In 1790 the state legislature decided that "public good would be served by a 64-foot road from Paulus Hook to Newark Couthouse". By 1795, a bridge over the Hackensack 950 feet (290 m) long and another over the Passaic 492 feet (150 m) long (at the site of the Bridge Street Bridge) were built creating an uninterrupted toll road connection. It is now known as the Newark Turnpike.

In 1840, the inhabitants of Lodi Township joined with present-day Secaucus, Bayonne, Jersey City, Hoboken, Weehawken, and Union City and petitioned for the creation of a new county due to the great distance which the petitioners had to travel to reach the county seat in Hackensack. This appeal resulted in the creation of Hudson County and the first mention of Harrison occurs in the law which was passed on April 13, 1840. Harrison Township was thereby established.

The first committee meeting of the Township of Harrison was held on April 16, 1840, and it is widely accepted that Harrison was named for President William Henry Harrison, who was elected that year.

Union Township was created as of February 19, 1852, from portions of the township and became part of Bergen County.

General N. N. Halstead succeeded in getting the necessary laws passed in Trenton and April 8, 1867, Kearny became a separate Township from land that was a part of Harrison, which included East Newark at the time; East Newark later seceded from Kearny, establishing their own Borough.

On March 25, 1869, Harrison town was incorporated, replacing the township.

While campaigning for re-election in 1912, President William Howard Taft told residents gathered for a rally that "you have reason to be proud of this Hive of Industry", from which was coined the town's motto, "The Beehive of Industry", which is still used today.

As the U.S. moved into the 20th century, these facilities played a major role in the development of new products for both the private and public sector, peaking during World War II. The small town of about only 14,000 residents had more than 90,000 workers commuting into it on a daily basis. In the 21st century the town is undergoing a transformation from a manufacturing center to a residential and service sector town.

The town borders the municipalities of East Newark and Kearny in Hudson County; and Newark in Essex County.

There were 4,869 households out of which 31.8% had children under the age of 18 living with them, 44.2% were married couples living together, 15.0% had a female householder with no husband present, and 33.0% were non-families. 22.1% of all households were made up of individuals, and 7.8% had someone living alone who was 65 years of age or older. The average household size was 2.80 and the average family size was 3.23.

There were 5,136 households out of which 33.7% had children under the age of 18 living with them, 49.8% were married couples living together, 13.9% had a female householder with no husband present, and 29.2% were non-families. 22.5% of all households were made up of individuals and 8.7% had someone living alone who was 65 years of age or older. The average household size was 2.81 and the average family size was 3.27.

The Harrison Fire Department operates out of a fire station located at 634 Sussex Street and operates a fire apparatus fleet of three engines, one ladder, and several special, support and reserve units. Due to cutbacks, the HFD usually is able to staff one engine with three members and one ladder with three members and one tour commander on duty. The HFD has a table of organization of 29 firefighters. In April 2013, officials from neighboring municipalities and fire departments expressed their frustration at the stresses placed on their firefighters in covering fires in Harrison.

As of January 1, 2014, Monmouth Ocean Hospital Service Corporation (MONOC) EMS provides 9-1-1 ambulance service to the city of Harrison and nearby East Newark. As part of the agreement, MONOC pays a $1,500 monthly fee for its use of the firehouse on Cleveland Avenue that had previously been used by Kearny Emergency Management Services.

Replacement of Interstate 280's partial access in central Harrison with service roads, a new interchange, and an overpass (to improve access to Harrison Avenue, the PATH station, and Red Bull Arena, and to give north-south passage to local street traffic) is in the planning stages.

The Harrison station on the PATH rapid transit system offers service to Newark, Jersey City, Hoboken and New York City. Built in 1913 and relocated to its present location in 1936, its major reconstruction was approved on March 28, 2012, and was scheduled to run from January 2013 to April 2017. The completion target was tentatively moved to 2018, and settling a required right-of-way renewal with Amtrak may delay the completion further.

The Northeast Corridor, built in the 19th century by the Pennsylvania Railroad and now owned by Amtrak, carries NJ Transit trains, and passes through the city on the same alignment as the PATH. There was a stop on the Northeast Corridor in Harrison, but it was eliminated due to the ease of picking up trains in Newark at Penn Station.

Harrison is served by buses operated by several bus companies. NJ Transit offers service within New Jersey on the 39, 30, 40 and 43 routes.

The closest airport in New Jersey with scheduled passenger service is Newark Liberty International Airport, located 4.8 miles (7.7 km) away in Newark and Elizabeth. 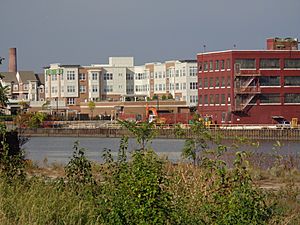 Old and new on the Passaic

The Harrison Waterfront Redevelopment Plan invited developers to submit plans that capitalize on the presence of the Harrison PATH Station and the Passaic River within a 275-acre (1.11 km2) area that covers 35% of the whole town. The Plan seeks to unite the developers' proposals with a design theme that includes motifs from Harrison's industrial, cultural, and environmental history as a means of fostering a new identity for Harrison that provides a variety of mixed-use, transit-oriented, pedestrian-scale development that will make Harrison a regional destination. 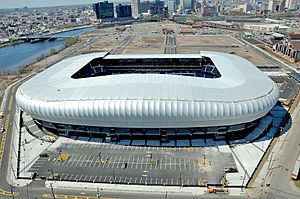 After years of delay, Red Bull Arena opened on March 20, 2010, with an exhibition game against the Brazilian club Santos FC. The soccer-specific stadium (SSS) was constructed at a cost of $200 million and has a capacity of approximately 25,000, with a natural grass field, featuring a full wavy translucent European-style roof that covers all of the seats in the stadium but not the field. The stadium sits alongside the Passaic River with a view of the Newark skyline, and is accessible via public transportation at the PATH train stop in Harrison. The stadium is owned and operated by Red Bull GmbH.

All content from Kiddle encyclopedia articles (including the article images and facts) can be freely used under Attribution-ShareAlike license, unless stated otherwise. Cite this article:
Harrison, New Jersey Facts for Kids. Kiddle Encyclopedia.