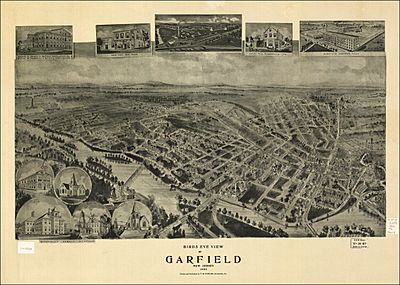 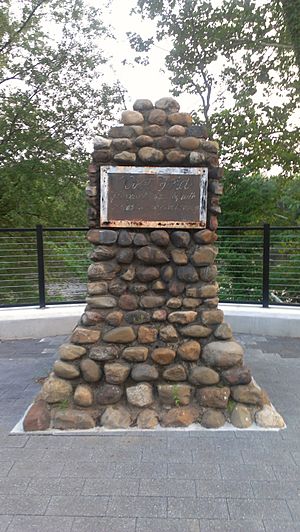 The city has land borders with adjacent Elmwood Park, Lodi, Saddle Brook and South Hackensack. The Saddle River is a shared border with Wallington. There are three bridges over the Passaic River crossing the municipal and county line to Passaic and Clifton in Passaic County.

The United States Environmental Protection Agency has identified Garfield as the site of groundwater contaminated hexavalent chromium from a spill in 1983 at the E.C. Electroplating Corporation site. In 2016, the EPA announced a $37 million project to cleanup contamination at the site using Superfund money, as the company responsible for the spill of 3,600 US gallons (14,000 l; 3,000 imp gal) of chromic acid is no longer in business.

Based on data from the 2011-2015 American Community Survey, the city had a median age of 35.4, the lowest median age in the county. Garfield was one of four municipalities with a median age below the national and state average of 37.6, and well below the median age of 41.5 in Bergen County.

The borough is also home to the architecturally prominent Russian Orthodox Church of Three Saints, which serves the growing Ukrainian American community in western Bergen County. 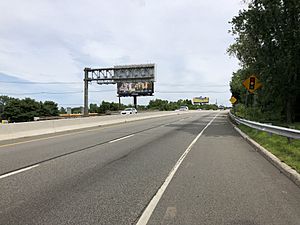 US 46 eastbound in Garfield

U.S. Route 46 and County Route 507 pass through Garfield. Other main roads include Midland Avenue, Outwater Lane, River Drive and Passaic Street. There are five crossings of the Lower Passaic River.

Both the Garfield station and the Plauderville station, located on the Saddle Brook border, are served by NJ Transit's Bergen County Line, providing service to Hoboken Terminal, with transfers available at Secaucus Junction to Penn Station in Midtown Manhattan and to most of New Jersey Transit's other train lines.

New Jersey Transit buses includes lines 160 and 161 serving the Port Authority Bus Terminal in Midtown Manhattan, and local service on the 702, 707, 709 and 758 routes.

The Garfield Public Schools serve students in pre-kindergarten through twelfth grade. The district is one of 31 former Abbott districts statewide that were established pursuant to the decision by the New Jersey Supreme Court in Abbott v. Burke which are now referred to as "SDA Districts" based on the requirement for the state to cover all costs for school building and renovation projects in these districts under the supervision of the New Jersey Schools Development Authority.

Public school students from the city, and all of Bergen County, are eligible to attend the secondary education programs offered by the Bergen County Technical Schools, which include the Bergen County Academies in Hackensack, and the Bergen Tech campus in Teterboro or Paramus. The district offers programs on a shared-time or full-time basis, with admission based on a selective application process and tuition covered by the student's home school district.

Bergen Arts and Science Charter School, which opened in September 2006, serves public school students in the district, as well as those from Hackensack and Lodi. The elementary (grades K-3) and middle (4-8) school facilities are located in Garfield, while the high school (9-12) is in Hackensack. As of the 2018–19 school year, the charter school had an enrollment of 1,163 students and 83.0 classroom teachers (on an FTE basis), for a student–teacher ratio of 14.0:1.

People who were born in, residents of, or otherwise closely associated with Garfield include:

All content from Kiddle encyclopedia articles (including the article images and facts) can be freely used under Attribution-ShareAlike license, unless stated otherwise. Cite this article:
Garfield, New Jersey Facts for Kids. Kiddle Encyclopedia.