Kids Encyclopedia Facts
Not to be confused with Hohokus Township, New Jersey.

Ho-Ho-Kus was incorporated as a borough by an act of the New Jersey Legislature on October 12, 1908, from what had originally been the borough of Orvil, which was in turn created on March 8, 1905, from portions of Orvil Township.

As of the 2000 United States Census, Ho-Ho-Kus was the 15th-wealthiest community in New Jersey with a per capita money income of $63,594 as of 1999, an increase of 36.9% from the $46,451 recorded in 1989. The borough's median household income was $165,827 in 2013. In 2011, New Jersey Monthly magazine named Ho-Ho-Kus the best place to live in the state of New Jersey, citing its affluence, low crime rate and the quality of its school system, as well as its proximity to New York City and other major commercial destinations.

The meaning of the name Ho-Ho-Kus is in dispute. From the official history on the borough's website, the most likely origin is a contraction of the Delaware Indian term "Mah-Ho-Ho-Kus" (or "Mehokhokus"), meaning "the red cedar."

Other meanings have been suggested over the years and are listed on the borough's website, including an Indian word for running water, a cleft in the rock or under the rock or hollow rock, the word "hohokes", signifying the whistle of the wind against the bark of trees, the Chihohokies Indians whose chief lived here, the Dutch Hoog Akers for "high acorns" or Hoge Aukers, Dutch for "high oaks", the Indian word hoccus meaning "fox", or woakus, "gray fox", or that the "Ho" part means joy or spirit, and the rest of the name from "hohokes," meaning a kind of bark of a tree.

A constant source of confusion has been the manner in which the borough's name has been spelled, with each syllable capitalized and separated by hyphens. The confusion is only exacerbated by the existence of Hohokus Township, which comprised the area of present-day Ho-Ho-Kus and other surrounding communities, yet was spelled without the multiple capitalization or the hyphens. Ho-Ho-Kus is served by interchange 168 on the Garden State Parkway which spells the municipality as "Hohokus" on its exit signing.

A few theories have been offered for the hyphens and capitalization. One is that it was intended to differentiate between the borough and Hohokus Township, which was formed on April 9, 1849, and continued to exist until November 7, 1944, when a referendum was passed changing the name to present-day Mahwah. Another explanation was that it was meant to avoid confusion by postal clerks with mail being sent to Hoboken.

While efforts had been made in the ensuing decades to change the name or to alter the way in which the name of the borough is spelled, the borough remains as "Ho-Ho-Kus." 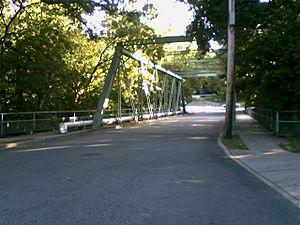 There were 1,401 households out of which 40.7% had children under the age of 18 living with them, 74.2% were married couples living together, 6.6% had a female householder with no husband present, and 17.6% were non-families. 15.5% of all households were made up of individuals, and 9.2% had someone living alone who was 65 years of age or older. The average household size was 2.91 and the average family size was 3.26.

There were 1,433 households, out of which 38.7% had children under the age of 18 living with them, 76.6% were married couples living together, 6.1% had a female householder with no husband present, and 16.3% were non-families. Of all households 14.6% were made up of individuals, and 7.1% had someone living alone who was 65 years of age or older. The average household size was 2.82 and the average family size was 3.11.

Ho-Ho-Kus is primarily an upper-class and upper-middle class suburb of New York City, ranking 15th in the state of New Jersey in terms of per-capita income. According to the Forbes 2010 survey of the most expensive ZIP codes in America, Ho-Ho-Kus ranked 268th nationally, with a median home price of $901,841.

The Ho-Ho-Kus School District is classified in District Factor Group "J," the highest of eight categories, in both the 2000 and 1990 rankings. District Factor Groups are used in the state of New Jersey to rank school districts according to common socioeconomic characteristics. Northern Highlands Regional High School, which receives students from Ho-Ho-Kus, Allendale, Upper Saddle River, and part of Saddle River, is placed in the same category. 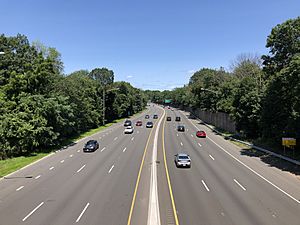 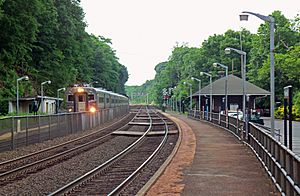 The Ho-Ho-Kus NJ Transit station, at Brookside Avenue and 1st Street, serves both the Main Line and the Bergen County Line.

Ho-Ho-Kus can also be accessed via exit 168 on the Garden State Parkway in neighboring Washington Township.

Ho-Ho-Kus is served by NJ Transit at the Ho-Ho-Kus station, which is located at Brookside Avenue and 1st Street, one block from Franklin Turnpike. The station provides service on both the Bergen County Line and Main Line, which run north–south to Hoboken Terminal with connections via the Secaucus Junction transfer station to NJ Transit New York Penn Station and to other NJ Transit rail service. Connections are available at the Hoboken Terminal to other NJ Transit rail lines, the PATH train at the Hoboken PATH station, New York Waterways ferry service to the World Financial Center and other destinations and Hudson-Bergen Light Rail service.

Short Line provides service between the borough and the Port Authority Bus Terminal in Midtown Manhattan from a stop at Route 17 and Hollywood Avenue, with limited service offered at a stop at Franklin Turnpike and Maple Avenue. 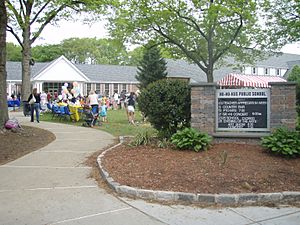 The Ho-Ho-Kus School District serves public school students in pre-kindergarten through eighth grade at Ho-Ho-Kus Public School. As of the 2018–19 school year, the district, comprised of one school, had an enrollment of 599 students and 46.0 classroom teachers (on an FTE basis), for a student–teacher ratio of 13.0:1. The school population increased more than 200 students in the decade through 2008.

Local secondary school students in public school attend Northern Highlands Regional High School in nearby Allendale, which serves students in the ninth through twelfth grades grades from Allendale, Ho-Ho-Kus, Upper Saddle River and some students from Saddle River, as part of sending/receiving relationships with the Ho-Ho-Kus district. As of the 2019–20 school year, the high school had an enrollment of 1,400 students and 111.9 classroom teachers (on an FTE basis), for a student–teacher ratio of 12.5:1. New Jersey Monthly magazine ranked Northern Highlands Regional High School as the 22nd-best high school of the 328 ranked schools in New Jersey in its 2012 rankings of the "Top Public High Schools" after being ranked 6th of 322 schools in 2010. The ten voting seats on the high school district's board of education are allocated based on a percentage of the enrollment coming from each constituent municipality, with one seat allocated to Ho-Ho-Kus.

After ending a long-standing sending relationship to Ridgewood High School in the mid-1970s, Ho-Ho-Kus students started attending Midland Park High School. The small size of the Midland Park school and the lack of electives led to efforts in the mid-1990s to find another high school to serve students from the borough. Since then, high school students from Ho-Ho-Kus have been attending Northern Highlands Regional High School. The send / receive agreement between Ho-Ho-Kus and Northern Highlands began in the 1990s. In 2016, the Ho-Ho-Kus and Northern Highlands districts reached an agreement to extend the send / receive agreement through 2026 under a fixed-price contract by which Ho-Ho-Kus would pay $3.6 million for the 2016–17 school year, escalating by 2% a year to $4.3 million in 2025–26, regardless of the number of students from the borough sent to the high school.

The borough is home to the Ho-Ho-Kus Waldwick Cooperative Nursery School.

People who were born in, residents of, or otherwise closely associated with Ho-Ho-Kus include:

All content from Kiddle encyclopedia articles (including the article images and facts) can be freely used under Attribution-ShareAlike license, unless stated otherwise. Cite this article:
Ho-Ho-Kus, New Jersey Facts for Kids. Kiddle Encyclopedia.