Lynne Ann Cheney ( CHAYN-ee; née Vincent; born August 14, 1941) is an American author, scholar, and former talk show host. She is married to the 46th vice president of the United States, Dick Cheney, and served as the second lady of the United States from 2001 to 2009.

Lynne Ann Vincent was born on August 14, 1941 in Casper, Wyoming. Her mother, Edna Lolita (née Lybyer, 1919–1973), became a deputy sheriff, and her father, Wayne Edwin Vincent, was an engineer. A descendant of Mormon pioneers, and with roots in Denmark, Sweden, England, Ireland, and Wales, she was raised Presbyterian and became Methodist upon her marriage to Dick Cheney.

Cheney received her Bachelor of Arts degree in English literature with highest honors from Colorado College. She continued her education with a Master of Arts degree from the University of Colorado in Boulder, and a PhD in 19th-century British literature from the University of Wisconsin–Madison. Her dissertation was entitled "Matthew Arnold's Possible Perfection: A Study of the Kantian Strain in Arnold's Poetry". 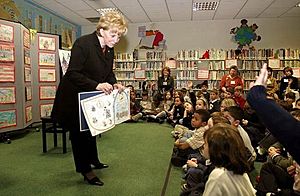 Lynne Cheney giving a public reading from her book America: A Patriotic Primer to the students of Vincenza Elementary School in Vicenza, Italy. (2004)

Cheney served as the sixth chair of the National Endowment for the Humanities from 1986 to 1993. In 1995, she founded the American Council of Trustees and Alumni, a think tank devoted to reforming higher education.

She is a senior fellow in education and culture at the American Enterprise Institute for Public Policy Research. She also serves as a director of Reader's Digest Association, Inc. From 1995 to 1998, Cheney served as the co-host of the Sunday edition of CNN's Crossfire, replacing Tony Snow.

Cheney served on Lockheed Corporation's board of directors from 1994 to 2001. She gave up the $120,000-a-year position shortly before her husband's inauguration. She had served on the Lockheed board's finance, and nominating and corporate governance committees.

In 2000, she was mentioned as a possible conservative female pick for Republican vice presidential nominee on the George W. Bush ticket. The appointed head of the nominating committee was her husband, Dick Cheney, then the CEO of Halliburton, who eventually emerged as Bush's choice.

On an October 10, 2007, episode of The Daily Show, Cheney stated her opposition to a constitutional amendment banning same-sex marriage. Her daughter Mary is openly lesbian and both Lynne Cheney and her husband Dick have publicly supported same-sex marriage during and after his vice presidency.

Lynne Cheney is the author or co-author of several books

Lynne Cheney has been married to Richard "Dick" Cheney since 1964. They have two daughters and seven grandchildren. Their daughters are Elizabeth Cheney (born July 28, 1966), and Mary Cheney (born on March 14, 1969).

Lynne Cheney has one brother, Mark Vincent, who lives in Wyoming with his wife, Linda.

Cheney was considered a possible contender to complete the term of Craig L. Thomas as U.S. senator from Wyoming following his death in 2007. A spokesman stated that she was considering the post but she never signed an application to become a candidate. Cheney herself acknowledged in a 2015 interview that she had considered running for the senate seat. If she had won the seat, she would have become the first former second lady to be a member of the Senate since Muriel Humphrey was appointed Senator from Minnesota after her husband's death in 1978.

All content from Kiddle encyclopedia articles (including the article images and facts) can be freely used under Attribution-ShareAlike license, unless stated otherwise. Cite this article:
Lynne Cheney Facts for Kids. Kiddle Encyclopedia.