In October 1960, the power station was renamed the Wylie Hydroelectric Station, and the lake was renamed Lake Wylie in honor of W. Gil Wylie, one of the founders of the original Catawba Power Company that had created the lake and become Duke Power. 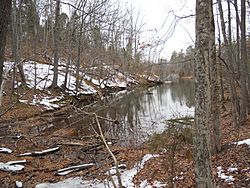 Lake Wylie's location on both the South Carolina and North Carolina borders makes it a common recreational destination for residents of nearby cities including Charlotte, Fort Mill, and Rock Hill. Duke Power manages six public boat access areas on the lake. There are also two towns that are located on Lake Wylie, including Tega Cay and Lake Wylie.

Lake Wylie is one of 11 lakes on the Catawba River and is the oldest lake in the Catawba River basin, with water being moved around each lake on the chain system through Duke Power. The lake has a surface area of approximately 13,443 acres (54.361 km2) with 325 miles (523 km) of shoreline, and stretches from the Mountain Island Dam, south of Mountain Island Lake in North Carolina to the Wylie Dam on the south end of the lake. The average depth of the lake is just over 20 feet.

All content from Kiddle encyclopedia articles (including the article images and facts) can be freely used under Attribution-ShareAlike license, unless stated otherwise. Cite this article:
Lake Wylie Facts for Kids. Kiddle Encyclopedia.