Benjamin Obadiah Iqbal Zephaniah (born 15 April 1958) is a British writer and dub poet. He was included in The Times list of Britain's top 50 post-war writers in 2008.

Zephaniah was born and raised in the Handsworth district of Birmingham, which he has called the "Jamaican capital of Europe". He is the son of a Barbadian postman and a Jamaican nurse. A dyslexic, he attended an approved school but left aged 13 unable to read or write.

He writes that his poetry is strongly influenced by the music and poetry of Jamaica and what he calls "street politics". His first performance was in church when he was eleven, and by the age of fifteen, his poetry was already known among Handsworth's Afro-Caribbean and Asian communities. He received a criminal record with the police as a young man and served a prison sentence for burglary. Tired of the limitations of being a black poet communicating with black people only, he decided to expand his audience, and headed to London at the age of twenty-two.

He became actively involved in a workers' co-operative in Stratford, London, which led to the publication of his first book of poetry, Pen Rhythm (Page One Books, 1980). Three editions were published. Zephaniah has said that his mission is to fight the dead image of poetry in academia, and to "take [it] everywhere" to people who do not read books, so he turned poetry readings into concert-like performances.

His second collection of poetry, The Dread Affair: Collected Poems (1985), contained a number of poems attacking the British legal system. Rasta Time in Palestine (1990), an account of a visit to the Palestinian occupied territories, contained poetry and travelogue.

His 1982 album Rasta, which featured The Wailers' first recording since the death of Bob Marley as well as a tribute to the political prisoner (later to become South African president) Nelson Mandela, gained him international prestige and topped the Yugoslavian pop charts. It was because of this recording that he was introduced to Mandela, and in 1996, Mandela requested that Zephaniah host the president's Two Nations Concert at the Royal Albert Hall, London. Zephaniah was poet in residence at the chambers of Michael Mansfield QC, and sat in on the inquiry into Bloody Sunday and other cases, these experiences leading to his Too Black, Too Strong poetry collection (2001). We Are Britain! (2002) is a collection of poems celebrating cultural diversity in Britain.

Zephaniah's first book of poetry for children, called Talking Turkeys, was reprinted after six weeks. In 1999 he wrote a novel for teenagers, Face, the first of four novels to date.

Zephaniah lived for many years in East London but in 2008 began dividing his time between Beijing and a village near Spalding, Lincolnshire.

He was married for twelve years to Amina, a theatre administrator, whom he divorced in 2001.

In 2011, Zephaniah accepted a year-long position as poet in residence at Keats House in Hampstead, London.

In 2020, he appeared as a panellist on the BBC television show QI, on the episode "Roaming". 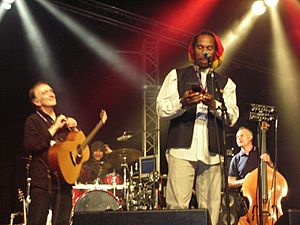 Collecting the Hancock at Cambridge Folk Festival 2008 with Martin Carthy looking on.

All content from Kiddle encyclopedia articles (including the article images and facts) can be freely used under Attribution-ShareAlike license, unless stated otherwise. Cite this article:
Benjamin Zephaniah Facts for Kids. Kiddle Encyclopedia.