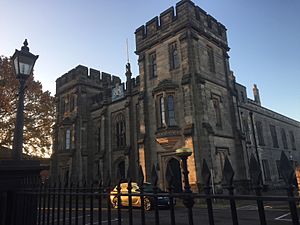 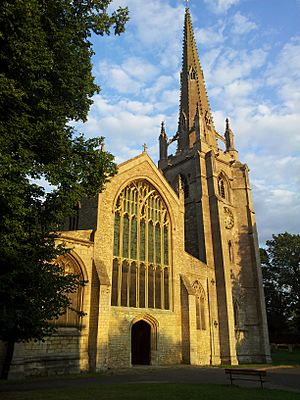 Spalding is a market town on the River Welland in the South Holland district of Lincolnshire, England. The town had a population of 31,588 at the 2011 census. The town is the administrative centre of the South Holland District. The town is located between the cities of Peterborough and Lincoln. As well as the towns of Bourne, March, Boston, Wisbech, Holbeach and Sleaford.

The town was well known for the annual Spalding Flower Parade, held from 1959 to 2013. The parade celebrated the region's vast tulip production and the cultural links between the Fens and the landscape and people of South Holland. At one time, it attracted crowds of more than 100,000. Since 2002 the town has held an annual pumpkin festival in October.

Archeological excavations at Wygate Park in Spalding have shown that there has been occupation in this area from at least the Roman period, when this part of Lincolnshire was used for the production of salt. It was a coastal siltland. At Wygate Park salt making seems to have come to an end by the mid-3rd century AD; climatic change and flooding may have made such activities difficult, causing the practice to die out.

The settlement's name is derived from an Anglian tribe, the Spaldingas, who settled in the area during the 6th century. They may have retained their administrative independence within the Kingdom of Mercia into the late 9th century, when Stamford became one of the Five Boroughs of the East Midlands under Danish control after years of invasion and occupation.

In John Bartholomew's Gazetteer of the British Isles (1887), Spalding was described as a:

"market town and par. with ry. sta., Lincolnshire, on River Welland, 14 m. SW. of Boston, 12,070 ac., pop. 9260; P.O., T.O., three Banks, two newspapers. Market-day, Tuesday. Spalding is an important railway centre, while the river has been made navigable to the town for vessels of from 50 to 70 tons. It is situated in a rich agricultural district, and has a large trade, by river and by rail, in corn, wool, coal, and timber. It has also flour, bone, and saw mills, breweries, and coach works. There are remains of a priory of 1501, a fine old church (restored 1860), a grammar school, a corn exchange, and a spacious market place."

Draining of the Fens 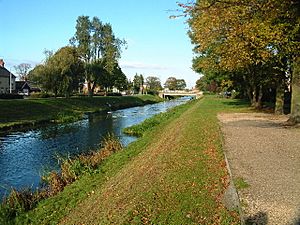 The River Welland flows north from Crowland, through Spalding and passing the village and port of Fosdyke before leading out to the Wash, bisecting Spalding from east to west; the town has developed as a linear settlement around the river. Land had been reclaimed from the wetlands in the area since mediaeval times, and Spalding was subject to frequent flooding. The Coronation Channel, opened in 1953, diverted the excess waters around Spalding and ended the flooding. The area around the banks has been developed for residential and business use. Although this area has become heavily built up, there is much recreational use of the river and fishing is still popular.

In July 2005 a "Spalding Water Taxi" service was launched, running from Easter to late October. Its route is from just off Spalding's High Street, upstream along the river, turning into the Coronation Channel, and then to Springfields Outlet Shopping & Festival Gardens, and back. It is mainly used as a recreational tourist attraction.

Around the north-west of Spalding is a large waterway called Vernatt's Drain, named after one of the Adventurers who drained the Fens in the 17th century. Philibert Vernatti was made a baronet on 7 June 1643.

A South Holland council nature reserve is situated on part of the old Boston railway line at Vernatts Drain. The Drain runs from the pumping station at Pode Hole to Surfleet Seas End.

Fulney Lock is the point where the Welland is no longer tidal. Spalding falls within the drainage area of the Welland and Deepings Internal Drainage Board.

The town has a population of about had a population of 31,588 at the 2011 census (including the large village of Pinchbeck, to the north and the hamlet of Little London to the south) and this was estimated to have increased to 36,737 in 2020 according to government data, an increase of 1.6%. In the past concerns have been expressed about the exploitation of farm and industrial workers from eastern Europe, as well as increased pressure on local services as a result of unplanned population increase; in 2007 the then local MP, Mark Simmonds, said that "the real scale [of modern slavery in the area] is unknown, but it is out of control". 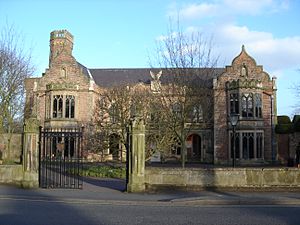 Ayscoughfee Hall dates from the 15th-century and is now operated as a museum. St Mary and St Nicolas was built in 1284 by William de Littleport of Spalding Priory. The tower and spire were added in 1360.

St John the Baptist, was built in 1875, at the same time as the adjacent Church school. St Paul's at Fulney, on the eastern side of the town, was designed by Sir George Gilbert Scott and completed in 1880 after his death.

Other local attractions are the Pinchbeck Engine Museum (just north of Spalding), the Bulb Museum (situated at Birch Grove Garden Centre, Pinchbeck) and the Gordon Boswell Romany Museum, to the south of the town. The Chain Bridge Forge is a 19th-century blacksmith's forge on the River Welland; many of its original features have been preserved and it is operated as a museum.

The Chatterton Tower is near Sainsburys.

Spalding War Memorial is located in the grounds of Ayscoughfee Hall and commemorates the 224 men from the town killed in the First World War. It was conceived by Barbara McLaren, the widow of the town's MP Francis McLaren, and designed by Sir Edwin Lutyens, known for his war memorials including the Cenotaph on Whitehall in London. It takes the form of a pavilion and a Stone of Remembrance at the head of a long reflecting pool; the names of the fallen are inscribed on the back wall of the pavilion.

Several supermarkets are available to locals: a small Tesco Express store, a Sainsbury's, a Lidl and an Aldi in the centre of the town, a Marks and Spencer Food Hall, and a Morrisons in Pinchbeck. Outside of the town centre, Springfields Shopping Outlet and Gardens offer a wide range of outlet stores set in a variety of landscaped gardens designed by Charlie Dimmock and Chris Beardshaw among others. The Castle Sports Complex provides fitness facilities throughout the day and evening. The South Holland Centre is an arts centre on Market Place that stages concerts, theatre productions and film showings.

History of the barcode

On 7 October 1979, the first barcode was used in the UK at Key Markets in Spalding.

A new £425m, 860MW combined cycle gas turbine power station, owned by Intergen, was built on the former site of British Sugar on West Marsh Road by Bechtel in October 2004. Intergen have also consented to build a second 900 MW expansion to its existing Power station, which is due to commence construction 2011. In mid-2006 a new wind farm (operated by Wind Prospect UK in nearby Deeping St Nicholas) became visible from much of Spalding. 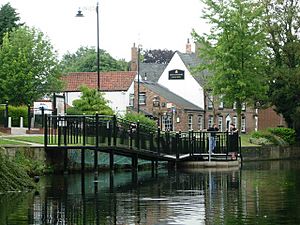 The Lincolnshire Poacher pub and the terminus of the water taxi

Spalding, like nearby Boston, is a regular destination of heavy goods vehicles transporting processed vegetables and other food produce. The A16 used to pass through the town until August 1995, when the Spalding-Sutterton Improvement (by-pass) was opened, built mostly on the closed Spalding to Boston railway line. The twelve-mile (19 km) A1073 between Spalding and Eye Green in Peterborough has been replaced by a completely new road classified as the A16, replacing the previous A16 that ran to Stamford. The older road has been renumbered as the A1175. 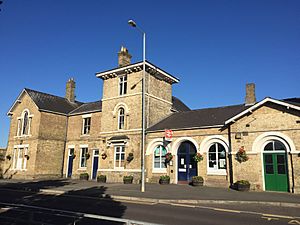 Spalding railway station is situated on the Lincoln Central - Peterborough railway line, operated by East Midlands Railway. The service is irregular, and it does not run at night or on Sundays. It does provide convenient access to Peterborough for employment and shopping. The service to Peterborough was withdrawn by BR in October 1970 as part of the closure of the East Lincolnshire route from Grimsby and Boston, but reinstated in June 1971 with a grant from Spalding Urban District Council. This was one of the first examples of this type of rail support in the UK and was not advocated in the Beeching Report.

The section of the Great Northern & Great Eastern 'Joint' line from March, which carried the 'Boat Train' between Harwich and Sheffield, closed in 1982.

Spalding was also on the east–west Midland and Great Northern Joint Railway, which had Bourne to the West and Holbeach to the east. It closed in February 1959, ending through passenger services from Leicester to Great Yarmouth via King's Lynn and Norwich. Local freight, mainly farm produce, continued to be carried between Bourne and Sutton Bridge until 1964.

On 4 May 2002, Spalding had the honour of having a main-line diesel locomotive named after it. Class 31 diesel No. 31106, in immaculate condition after a major works overhaul, hauled the 'St James Tripper' excursion to Peterborough from Preston via Doncaster, Lincoln and Sleaford, and made a brief stop at the station to have its 'Spalding Town' nameplates unveiled by Colin Fisher, Chairman of South Holland District Council. No. 31106 is the property of Cambridgeshire businessman and author Howard Johnston, who was born at nearby Cowbit and educated in the town. In 2012, the locomotive was still on hire to Rail Vehicle Engineering Limited and employed on Network Rail track measurement trains all over the United Kingdom. A replica 'Spalding Town' nameplate has been presented to SHDC for public display. 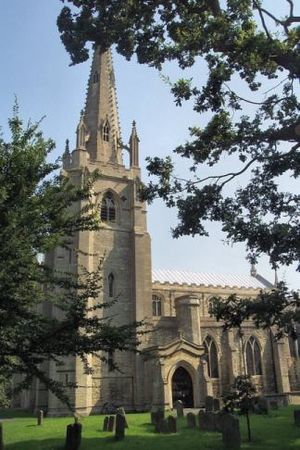 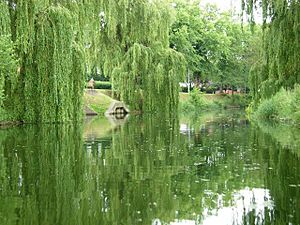 Willow trees next to the Welland 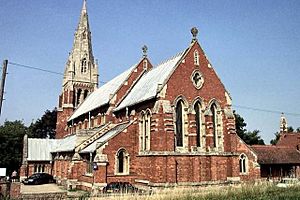 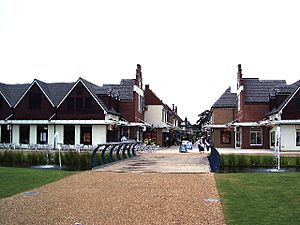 The local football team is Spalding United, who play in the Northern Premier League Division One South East.

The local rugby team is Spalding RFC, who play in Midland Division - Midlands 3 South. They play at Memorial Field.

The local cricket team is Spalding Town Cricket Club, who have three teams on a Saturday in the South Lincs and Border Leagues and a Rutland League team and a Friendly XI on a Sunday for 2012. This as well as youth teams at multiple age groups competing in the BCYCA Leagues.

The local hockey club is Spalding HC, with the men's 1st XI playing in East Division 2N and the women in 2NW. 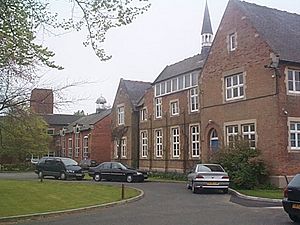 The town's state grammar schools (still selective by eleven-plus exam) are Spalding Queen Elizabeth Royal Free Grammar School (11-16 for boys) and Spalding High School (11-16 for girls), both of which have mixed sixth forms (16-18).

A vocational 6th form was established and launched in September 2008 as part of the Gleed Campus. It is not an automatic transition as with other schools in the area, like the Grammar, High, and the Deepings. Previous to this, there was no sixth-form available for pupils not attending the grammar schools, although pupils from Gleed schools can and do transfer to the Grammar and High for A-Levels.

All content from Kiddle encyclopedia articles (including the article images and facts) can be freely used under Attribution-ShareAlike license, unless stated otherwise. Cite this article:
Spalding, Lincolnshire Facts for Kids. Kiddle Encyclopedia.