The Pinchbeck Engine is a drainage engine, a rotative beam engine built in 1833 to drain Pinchbeck Marsh, to the north of Spalding, Lincolnshire, in England. Until it was shut down in 1952, the engine discharged into the Blue Gowt which joins the River Glen at Surfleet Seas End.

In 1952 the engine was rendered obsolete by modern electric pumps, and stood forgotten until being opened to the public as a museum in 1979. The coal store was cleared and now houses the associated Museum of Land Drainage. The museum complex includes the blacksmith's shop, still in its original condition. The museum is operated by the Welland and Deepings Internal Drainage Board, successors to the commissioners who erected the engine. The buildings are Grade II listed and also a Scheduled Ancient Monument.

The chimney was demolished in 1952, and no actions were taken to preserve the boiler, which is no longer in a fit state to be used. The engine is a static exhibit, which can be rotated by an electric motor for demonstration purposes. 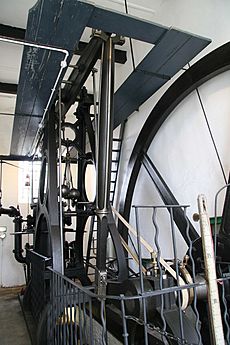 The engine frame and flywheel

The boiler dates from 1895 and is a twin furnace Lancashire boiler, delivering 12 psi. It consumed around 1 cwt of coal per hour. Coal supplies were originally brought by barge, but after the land was successfully drained a railway line was laid from Spalding to Boston, and coals were delivered to a nearby goods facility. They were then transported on a very short narrow gauge railway line in colliery-style tubs. The motive power for this appears to have been human. One of the tubs and a metre or so of line is displayed at the museum.

The engine is said to be the earliest 'A'-frame engine still in situ, the longest-working beam engine in the Fens, and the last in use.

All content from Kiddle encyclopedia articles (including the article images and facts) can be freely used under Attribution-ShareAlike license, unless stated otherwise. Cite this article:
Pinchbeck Engine Facts for Kids. Kiddle Encyclopedia.