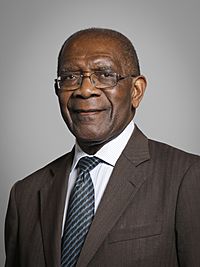 William Manuel Morris, Baron Morris of Handsworth, OJ, DL (born 19 October 1938), generally known as Bill Morris, is a former British trade union leader. He was General Secretary of the Transport and General Workers' Union from 1992 to 2003. He was the first black leader of a major British trade union. Morris became a member of the House of Lords in 2006. He is a member of the Labour Party.

All content from Kiddle encyclopedia articles (including the article images and facts) can be freely used under Attribution-ShareAlike license, unless stated otherwise. Cite this article:
Bill Morris, Baron Morris of Handsworth Facts for Kids. Kiddle Encyclopedia.