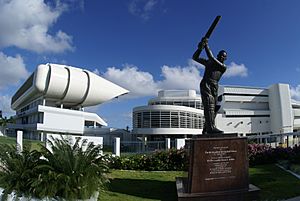 Sobers was a very good batsman and highly effective bowler. He was able to bowl both fast and as a spinner. Sobers is widely regarded as the greatest all rounder of all time and, with Sir Donald Bradman, as one of the greatest cricketers of any type.

All content from Kiddle encyclopedia articles (including the article images and facts) can be freely used under Attribution-ShareAlike license, unless stated otherwise. Cite this article:
Garfield Sobers Facts for Kids. Kiddle Encyclopedia.