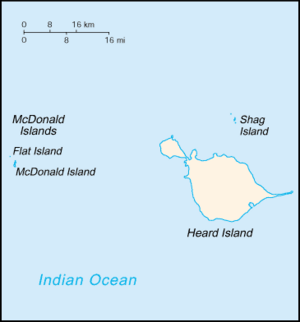 Heard Island and McDonald Islands (abbreviated as HIMI ) are islands in the Indian Ocean, about two-thirds of the way from Madagascar to Antarctica.

The islands are a UNESCO World Heritage Site.

The islands were discovered in 1833 by the British sailor Peter Kemp. They have been territories of Australia since 1947.

Big Ben is an active volcano. The volcano is also known as "Mawson Peak".

All content from Kiddle encyclopedia articles (including the article images and facts) can be freely used under Attribution-ShareAlike license, unless stated otherwise. Cite this article:
Heard Island and McDonald Islands Facts for Kids. Kiddle Encyclopedia.