The Antarctic prion (Pachyptila desolata) also known as the dove prion, or totorore in Māori, is the largest of the prions, a genus of small petrels of the Southern Ocean.

The Antarctic prion is a member of the genus Pachyptila, and along with the blue petrel makes up the prions. They in turn are members of the family Procellariidae, and the order Procellariiformes. The prions are small and typically eat just zooplankton; however as a member of the Procellariiformes, they share certain identifying features. First, they have nasal passages that attach to the upper bill called naricorns. Although the nostrils on the prion are on top of the upper bill. The bills of Procellariiformes are also unique in that they are split into between seven and nine horny plates. They produce a stomach oil made up of wax esters and triglycerides that is stored in the proventriculus. This can be sprayed out of their mouths as a defence against predators and as an energy rich food source for chicks and for the adults during their long flights. Finally, they also have a salt gland that is situated above the nasal passage and helps desalinate their bodies, due to the high amount of ocean water that they imbibe. It excretes a high saline solution from their nose.

The Antarctic prion has three subspecies.

The wingspan is 17 to 20 cm (6.7 to 7.9 in), while the body length is 28 cm (11 in). Like all prions, its underparts are white and upperparts are blue-grey, with a dark "M" across its back to its wingtips. It has a white eyebrow, blue-grey bill, and blue feet. It also has a grey wedge-shaped tail with a black tip. On its wings, its greater coverts are near black.

Like all prions, the Antarctic prion eats primarily zooplankton, which it obtains by filtering water through its upper bill. 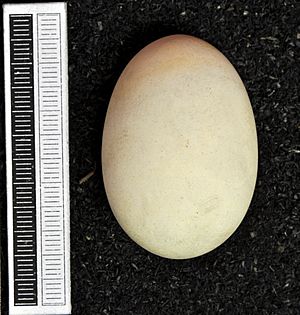 The Antarctic prion nests in colonies, and prefers islands in the Southern ocean. Both sexes assist in building the nest, as well as incubating the single egg and raising the chick.

It breeds in colonies on the Auckland Islands, Heard Island, Macquarie Island, Scott Island, South Georgia and the South Sandwich Islands, the South Orkney Islands, South Shetland Islands, Crozet Islands, and the Kerguelen Islands. When not breeding, it ranges throughout the southern oceans.

All content from Kiddle encyclopedia articles (including the article images and facts) can be freely used under Attribution-ShareAlike license, unless stated otherwise. Cite this article:
Antarctic prion Facts for Kids. Kiddle Encyclopedia.