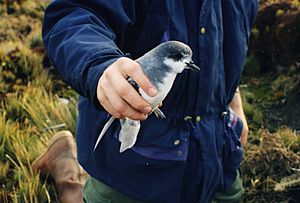 Holding a blue petrel during a ringing campaign.

The blue petrel (Halobaena caerulea) is a small seabird in the shearwater and petrel family, Procellariidae. This small petrel is the only member of the genus Halobaena, but is closely allied to the prions. It is distributed across the Southern Ocean but breeds at only six known sites, all close to the Antarctic Convergence zone.

The blue petrel is the only bird of the genus Halobaena, and a member of the order Procellariiformes. It shares certain identifying features with the rest of the order. First, it has nasal passages that attach to the upper bill called naricorns. The bills of Procellariiformes are unique in that they are split into between 7 and 9 horny plates. It also produces a stomach oil made up of wax esters and triglycerides that is stored in the proventriculus. This is used against predators as well as an energy rich food source for chicks and for the adults during their long flights. Finally, it also has a salt gland that is situated above the nasal passage and helps desalinate its body, due to the high amount of ocean water it drinks. It excretes a high saline solution from their nose.

The word "petrel" is derived from Saint Peter and the story of his walking on water. This is in reference to the petrel's habit of appearing to run on the water to take off.

The blue petrel feeds predominantly on krill, as well as other crustaceans, fish, and squid. It can dive up to 6 m (20 ft). 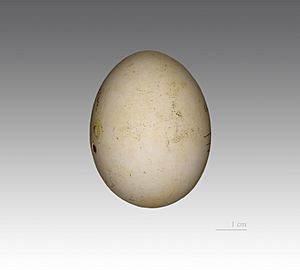 The blue petrel, like all members of the Procellariiformes, is colonial, and have large colonies. It nests in a burrow, and lays one egg per breeding attempt. Both parents incubate the egg for approximately 50 days and the chick fledges after 55 days. Skuas are the main danger for their eggs and chicks.

The blue petrel inhabits the southern oceans ranging as far north as South Africa, Australia and portions of South America. They mostly only breed in a narrow latitudinal band from 47° to 56° S on either side of the Antarctic Polar Front. Nesting on subantarctic islands, such as Marion Island, the Crozet Islands, Kerguelen Islands, Macquarie Island, South Georgia, Prince Edward Island.

In 2014 a breeding colony was discovered on Gough Island (40° S, 10° W), central South Atlantic Ocean, more than 700 km north of its known and usual breeding range. Breeding here appears to take place later than at colonies farther south, so although the discovery is recent it does not necessarily represent a recent range extension.

The blue petrel has a very large range and an estimate population of 3,000,000 adult birds and thus it is rated as Least Concern, by the IUCN.

All content from Kiddle encyclopedia articles (including the article images and facts) can be freely used under Attribution-ShareAlike license, unless stated otherwise. Cite this article:
Blue petrel Facts for Kids. Kiddle Encyclopedia.