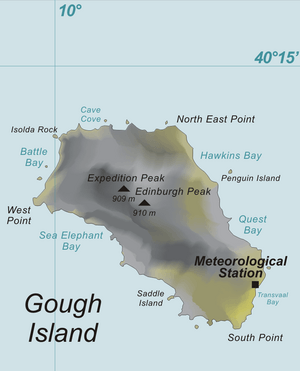 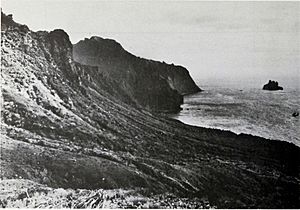 Nobody lives on Gough Island except for the workers of a weather station, which is usually six people. The South African National Antarctic Programme has maintained the island with British permission since 1956. It is one of the most remote places with a people always being there.

The island was first named Ilha de Gonçalo Álvares on Portuguese maps. It was named Gough Island after the British mariner Captain Charles Gough of the Richmond, who first saw the island in 1732. Confusion of the unusual Portuguese saint name Gonçalo with Spanish Diego led to the wrong name Diego Alvarez Island in English-language sources from the 1800s to 1930s.

However, the most likely explanation is that it was simply a misreading of 'Is de Go Alvarez', the name by which the island is represented on some of the early charts, the 'de Go' mutating into 'Diego'.

The details of the discovery of Gough Island are unclear, but the most likely occasion is July 1505 by the Portuguese explorer Gonçalo Álvares. Maps during the next three centuries named the island after him. On some later maps, this was erroneously given as Diego Alvarez.

According to some historians, the British merchant Anthony de la Roché was the first to land on the island in the austral autumn of 1675.

Charles Gough rediscovered the island on 3 March 1732. He thought it was a new find. It had been named Gonçalo Álvares since 1505 after the captain of Vasco da Gama's flagship on his epic voyage to the east. It was under this name that it was marked with reasonable accuracy on the charts of the South Atlantic during the following 230 or so years.

Then, in 1732, Captain Gough of the British ship Richmond reported the discovery of a new island. He placed it 400 miles to the east of Gonçalo Álvares. Fifty years later, cartographers realised that the two islands were the same. Despite the priority of the Portuguese discovery, and the greater accuracy of the position given by them, "Gough's Island" was the name adopted.

In the early 19th century, sealers briefly inhabited the island. The earliest known example is a sealing gang from the U.S. ship Rambler (Captain Joseph Bowditch) which remained on the island in the 1804–1805 season. The sealing era lasted from 1804 to 1910 during which 34 sealing vessels are known to have visited the island, one of which was lost offshore.

The Scottish National Antarctic Expedition on the Scotia made the first visit to the island by a scientific party on 21 April 1904, when William Speirs Bruce and others collected specimens. The Shackleton–Rowett Expedition also stopped at the island in 1922.

Gough Island was formally claimed in 1938 for Britain, during a visit by HMS Milford of the Royal Navy. In 1995, the island was inscribed as a UNESCO World Heritage Site. In 2004, the site was extended to include Inaccessible Island and renamed Gough and Inaccessible Islands.

Gough Island is the only place outside South America from which the solar eclipse of September 12, 2034, will be visible; the centre of the path of totality crosses over the island.

According to the Köppen system, Gough Island features an oceanic climate (Cfb). Gough Island's temperatures are between 11 °C (52 °F) and 17 °C (63 °F) during the day year-round, due to its isolated position far out in the Atlantic Ocean. The Atlantic is much cooler in the southern hemisphere than the northern, but frosts are still very rare. As a result, summers are not very hot. It features a similar climate to the Fiordland area of New Zealand, the west coast of Scotland, or the Alaskan Panhandle. Precipitation is high during the entire year, and sunshine hours are few. Snow falls in the interior, but is rare at sea level.

Each year a new overwintering team arrives by ship from Cape Town (beginning in 2012, the S. A. Agulhas II) to staff the weather station and perform scientific research. The team for a particular year may be termed as "Gough" and an expedition number: for example, the 1956 team were "Gough 01", and the team for 2013 were "Gough 58". Each new team directly replaces the departing one, thereby maintaining a continual human presence on the island.

A team normally consists of:

The team is supplied with enough food to last the whole year. People and cargo are landed either by helicopter, from a helideck-equipped supply ship, or by a fixed crane atop a cliff near the station (a place aptly called "Crane Point").

In 2014 a member of the research team choked to death on the island and his body was taken back to South Africa.

All content from Kiddle encyclopedia articles (including the article images and facts) can be freely used under Attribution-ShareAlike license, unless stated otherwise. Cite this article:
Gough Island Facts for Kids. Kiddle Encyclopedia.