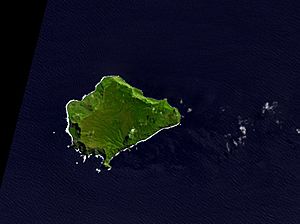 The island is approximately 17 nautical miles (31 km; 20 mi) to the southwest of the main island of the Tristan da Cunha archipelago. Mostly bare and inhospitable, the island has one small landing site named Port David on the northwesternmost point.

The island is 12.65 km2 (4.88 sq mi) in area. It is between South Atlantic Ocean 31 km (19 mi) south-west of Tristan da Cunha. Inaccessible Island is bordering with sheer sea cliffs, but one can landed on it through a few boulder beaches. Generations of sailors were wary of the difficult landings and inhospitable terrain. Inaccessible Island does not have any permanent inhabitants since 1873.

All content from Kiddle encyclopedia articles (including the article images and facts) can be freely used under Attribution-ShareAlike license, unless stated otherwise. Cite this article:
Inaccessible Island Facts for Kids. Kiddle Encyclopedia.