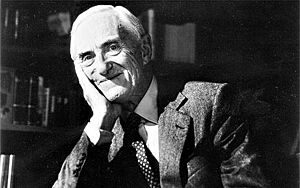 Patrick O'Brian, CBE (born Richard Patrick Russ; 12 December 1914 – 2 January 2000) was a British novelist and translator. He is best known for his Aubrey–Maturin series (1969–2004) of sea novels set in the Royal Navy during the Napoleonic Wars. The book series was about the friendship of the English naval captain Jack Aubrey and the Irish-Catalan doctor Stephen Maturin. The series had a total of 21 books.

O'Brian was born in Chalfont St Peter, Buckinghamshire, England. He served during the Second World War. He was married to Elizabeth Jones until their divorce. They had two children, Jane and Richard. He was married Mary Tolstoy from 1945 until her death in 1998. They lived in Collioure, France.

All content from Kiddle encyclopedia articles (including the article images and facts) can be freely used under Attribution-ShareAlike license, unless stated otherwise. Cite this article:
Patrick O'Brian Facts for Kids. Kiddle Encyclopedia.