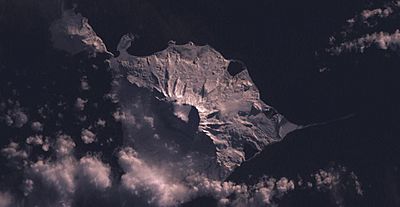 Big Ben is the large massif to the bottom right (southeast) of this image of Heard Island, from NASA World Wind

Big Ben is a volcanic massif that dominates the geography of Heard Island in the southern Indian Ocean. It is a stratovolcano with a diameter of about 25 km (16 mi). Its highest point is Mawson Peak, which is 2,745 m (9,006 ft) above sea level. Much of it is covered by ice, including 14 major glaciers which descend from Big Ben to the sea. Big Ben is the highest mountain in Australian Territory, except for those claimed in the Australian Antarctic Territory. A smaller volcanic headland, the Laurens Peninsula, extends about 10 km (6 mi) to the northwest, created by a separate volcano, Mount Dixon; its highest point is Anzac Peak, at 715 m (2,346 ft).

Big Ben has been known under a variety of names throughout its history, including Big Ben Peak, Old Ben Mountain, Emperor William Peak and Kaiser Wilhelm-Berg.

Volcanic activity at the cone has been known since 1881. An eruption occurred in 1993. Satellite images detected eruptions during 2000. On 2 February 2016, observations from Atlas Cove, 15 km (9 mi) northwest of Mawson Peak, showed plumes up to 1 km (3,300 ft) high over the volcano. Satellite images showed hotspots at various times from 2003 to 2008, and during September 2012. A further eruption was reported on 2 February 2016, and was recorded by scientists who happened to be in the area on an expedition. Big Ben does not endanger humans because Heard Island is uninhabited.

Big Ben is in a remote location, and without regular observation it is possible that eruptions have occurred at other times.

All content from Kiddle encyclopedia articles (including the article images and facts) can be freely used under Attribution-ShareAlike license, unless stated otherwise. Cite this article:
Big Ben (Heard Island) Facts for Kids. Kiddle Encyclopedia.