Fraser's dolphin (Lagenodelphis hosei) or Sarawak dolphin is a cetacean in the oceanic dolphin family (Delphinidae). It is found in deep waters in the Pacific Ocean and to a lesser extent in the Indian Ocean and Atlantic Oceans.

Fraser's dolphins are about 1 m (3 ft 3 in) long and 20 kg (44 lb) weight at birth, growing to 2.75 m (9 ft 0 in) and 200 kg (440 lb) at adulthood. They have a stocky build, a small fin in relation to the size of the body, conspicuously small flippers. The dorsal fin and beak are also insubstantial. The upper side is a gray-blue to gray-brown. A dirty cream colored line runs along the flanks from the beak, above the eye, to the anus. There is a dark stripe under this line. The belly and throat are usually white, sometimes tinged pink. The lack of a prominent beak is a distinguishing characteristic of the dolphin. From a distance however it may be confused with the striped dolphin which has a similar coloration and is found in the same regions.

Fraser's dolphins swim quickly in large tightly packed groups of about 100 to 1000 in number. Often porpoising, the group chop up the water tremendously. The sight of seeing a large group fleeing from a fishing vessels has been reported as "very dramatic".

It is also marked by having the smallest genitalia of any open sea dolphin.

The species feeds on pelagic fish, squid and shrimp found some distance below the surface of the water (200 m/660 ft to 500 m/1,600 ft). Virtually no sunlight penetrates this depth, so feeding is carried out using echolocation alone. 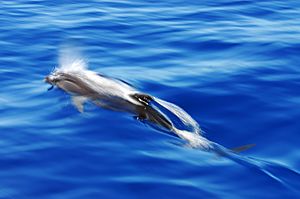 Though only accounted for relatively recently, the number of reported sightings has become substantial — indicating that the species may not be as rare as thought as recently as the 1980s. However the species is still not nearly as well understood as its more coastal cousins. No global population estimates exist.

The dolphin is normally sighted in deep tropical waters; between 30°S and 20°N. The Eastern Pacific is the most reliable site for viewings. Groups of stranded dolphins have been found as far afield as France and Uruguay. However these are regarded as anomalous and possibly due to unusual oceanographic conditions, such as El Niño.

The species is also relatively common in the Gulf of Mexico but less so in the rest of the Atlantic Ocean.

The Philippines is particularly known area for dolphin sightings, and is home to one of the larger populations of the Fraser's Dolphin in the world.

All content from Kiddle encyclopedia articles (including the article images and facts) can be freely used under Attribution-ShareAlike license, unless stated otherwise. Cite this article:
Fraser's dolphin Facts for Kids. Kiddle Encyclopedia.