Risso's dolphin (Grampus griseus) is the only species of dolphin in the genus Grampus. It is commonly known as the Monk dolphin among Taiwanese fishermen. Some of the closest related species to these dolphins include: pilot whales (Globicephala spp.), pygmy killer whales (Feresa attenuata), melon-headed whales (Peponocephala electra), and false killer whales (Pseudorca crassidens). 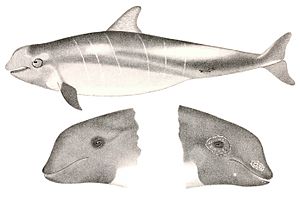 Illustrations by Edward Drinker Cope in 1876

Risso's dolphin has a relatively large anterior body and dorsal fin, while the posterior tapers to a relatively narrow tail. The bulbous head has a vertical crease in front.

Infants are dorsally grey to brown and ventrally cream-colored, with a white anchor-shaped area between the pectorals and around the mouth. In older calves, the nonwhite areas darken to nearly black, and then lighten (except for the always dark dorsal fin). Linear scars mostly from social interaction eventually cover the bulk of the body; scarring is a common feature in toothed whales, but Risso's dolphin tend to be unusually heavily scarred. Older individuals appear mostly white. Most individuals have two to seven pairs of teeth, all in the lower jaw. 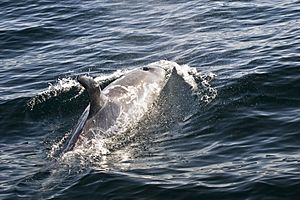 They are found worldwide in temperate and tropical waters, usually in deeper waters rather, but close to land. As well as the tropical parts of the Indian, Pacific and Atlantic Oceans, they are also found in the Persian Gulf and Mediterranean and Red Seas, but not the Black Sea (a stranding was recorded in the Sea of Marmara in 2012). They range as far north as the Gulf of Alaska and southern Greenland and as far south as Tierra del Fuego.

The population around the continental shelf of the United States is estimated to be in excess of 60,000. In the Pacific, a census recorded 175,000 individuals in eastern tropical waters and 85,000 in the west. No global estimate exists.

Risso’s dolphins do not require cutting teeth to process their cephalopod prey, which has allowed the species to evolve teeth as display weapons in mating conflicts.

Gestation requires an estimated 13–14 months, at intervals of 2.4 years. Calving reaches seasonal peaks in the winter in the eastern Pacific and in the summer and fall in the western Pacific. Females mature sexually at ages 8–10, and males at age 10–12. The oldest specimen reached 39.6 years.

All content from Kiddle encyclopedia articles (including the article images and facts) can be freely used under Attribution-ShareAlike license, unless stated otherwise. Cite this article:
Risso's dolphin Facts for Kids. Kiddle Encyclopedia.