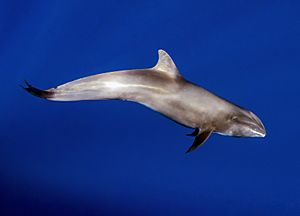 The melon-headed whale or melon-headed dolphin (species Peponocephala electra; other names are many-toothed blackfish, "melon whale" and electra dolphin) is a cetacean of the oceanic dolphin family (Delphinidae). It is closely related to the pygmy killer whale and pilot whale, and collectively these dolphin species are known by the common name blackfish. It is also related to the false killer whale. The melon-headed whale is widespread throughout the world's tropical waters, although not often seen by humans because it prefers deep water.

The melon-headed whale's head is a rounded cone giving the animal its common name. The body is more or less uniformly light grey except for a dark grey face – sometimes called the "mask". The flippers are long and pointed. The dorsal fin is tall with a pointed tip – reminiscent of its relative the killer whale. When viewed in profile, its head is not as rounded as the pygmy killer whale and this may aid identification.

This whale is capable of very fast swimming, particularly when startled. In flight, it often makes short, low jumps clear of the sea surface, splashing lots of water. Melon-headed whales usually gather in large numbers (at least 100 and possibly as many as 1,000 on rare occasions) and sometimes strand together.

Their primary diet is squid.

Hawaiian melon-headed whales spend much of their daytime at the surface resting.

Melon-headed whales are very social animals that live in large groups numbering between 100 and 1,000. They have been observed swimming close to each other and touching flippers. Within the large group, they usually swim in smaller groups of 10-14.

Resting at the surface 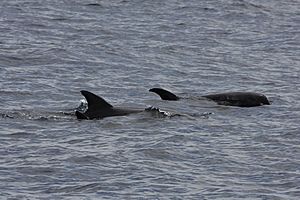 A pod in Bohol Sea between Balicasag Island and Alona Beach

The melon-headed whale lives far from shore in all the world's tropical and subtropical oceans. At the northern fringes of its range, it may also be found in temperate waters. Individuals have been sighted off the southern coast of Ireland. Ordinarily, however, the melon-headed whale is found beyond the continental shelf between 20°S and 20°N. Hawaii and Cebu, in the Philippines, are good sites for seeing the whale because the continental shelf there is narrow. Although no specific data exist, the species is unlikely to be migratory, in common with animals in its subfamily.

On February 10, 2009, over 300 melon-headed whales were spotted off the shallow waters of Bataan, in the Philippines. Local residents and volunteers guided the dolphins back to deeper waters. Although no definite explanation has been provided for the dolphins' behaviour, two of the three dead dolphins had damaged ear drums. Scientists from the International Whaling Commission claim that damage to the eardrums of melon-headed whales can be caused by high-power sonar equipment such as that used by Exxon Mobil when searching for oil.

In Hawaii, group sizes are variable, ranging from a single animal to pods of 800, but typically they are found in relatively large groups (median = 287 individuals). The Hawaiian populations include a large, deepwater group that moves frequently among the islands, and a small, shallow-water population that stays near the island of Hawaiʻi. Melon-headed whales are closely related to false killer whales, short-finned pilot whales, and pygmy killer whales. Hawaiian melon-heads spend much of their daytime at the surface resting.

Many marine mammals have parasites such as Isocyamus delphinii. These parasites (also known as whale lice) burrow into a whale or dolphin, especially where a wound is present. In 1999, a dead, stranded melon-headed whale was discovered and a necropsy was performed on it. Bite marks from smaller sharks were found, and in those bite marks were I. delphinii parasites, 12 in total, which is a record for the number of those parasites found on a marine mammal.

All content from Kiddle encyclopedia articles (including the article images and facts) can be freely used under Attribution-ShareAlike license, unless stated otherwise. Cite this article:
Melon-headed whale Facts for Kids. Kiddle Encyclopedia.