Bataan is a province situated in the Central Luzon region of the Philippines. Its capital is Balanga. Occupying the entire Bataan Peninsula on Luzon, Bataan is bordered by the provinces of Zambales and Pampanga to the north. The peninsula faces the South China Sea to the west and Subic Bay to the north-west, and encloses Manila Bay to the east.

The Battle of Bataan is famous in history as one of the last stands of American and Filipino soldiers before they were overwhelmed by the Japanese forces in World War II. The Bataan Death March was named after the province, where the infamous march started.

In 1647, Dutch naval forces landed in country in an attempt to seize the islands from Spain. The Dutch massacred the people of Abucay in Bataan.

Historian Cornelio Bascara documents that the province of Bataan was established on January 11, 1757 by Governor-General Pedro Manuel Arandia out of territories belonging to Pampanga and the corregimiento of Mariveles which, at the time, included Maragondon, Cavite across the Manila Bay.

Bataan featured prominently during World War II. Prior to the 1941 Japanese invasion, Bataan was a military reservation for the purpose of defending the fortress island of Corregidor.US Army stored nearly 1,000,000 US gallons (3,800 m3) of gasoline there, along with various munitions. At the southern tip of the peninsula the U.S. Navy had established a small base at the port of Mariveles. 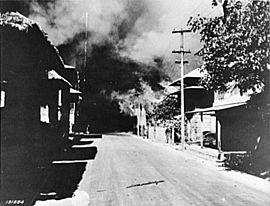 March 1942: burning houses after a Japanese bombing raid in Bataan

Shortly after the Japanese Army invaded the country in December 1941, the combined US and Filipino forces were being gradually overrun and General Douglas MacArthur moved his troops to the Bataan Peninsula in an attempt to hold out until a relief force could be sent from the US. Japanese forces started a siege of the peninsula on January 7, 1942, and launched an all-out assault on April 3, a few months after the Battle of the Points, Battle of the Pockets, the attack down Trail Number Two, and a half-dozen other brutal battles. The Bataan campaign was the last time a regular cavalry unit of the U.S. Army, the Philippine Scouts 26th Cavalry, was used as a horse mounted fighting unit. On the morning of January 16, 1942, Lt. Edwin Ramsey led the last cavalry charge into the town of Moron, routing the advancing Japanese infantry. Tragically, as the troops on Bataan were continually reduced in rations, the horses were eventually slaughtered to feed the starving soldiers.

The majority of the American and Filipino forces surrendered on April 9 and were forced to march more than 100 kilometers (62 mi) from Bataan to Capas, Tarlac, which became known as the Bataan Death March.

Bataan as seen from Manila Bay

The province has an area of [convert: needs a number], and covers the entire Bataan Peninsula, a rocky extension of the Zambales Mountains jutting out into the South China Sea, enclosing the Manila Bay. At the northern portion of the peninsula is Mount Natib (elevation 1,253 metres (4,111 ft)) and its surrounding mountains, separated from Mount Samat and the Mariveles Mountains in the south by a pass.

A narrow coastline plain characterizes the eastern portion of the province, while the western coast features many ridges, cliffs and headlands.

The three most prominent ethnic groups in Bataan are the Tagalogs, the Kapampangans and the Ayta Magbeken, though the third group has a lower population despite being the province's first inhabitants. The second group is mainly present at the northeast of the province, as well as in the provincial capital to a lesser extent.

Various religious groups are subscribed to by the people but Roman Catholicism is the predominant religion, comprising 85.46% of the Bataan population. Aglipayan, several other Christian and non-Christian faiths includes Iglesia Ni Cristo (4.47%), Evangelivcals (2.06%), Aglipayans (1.60%) and other groups. 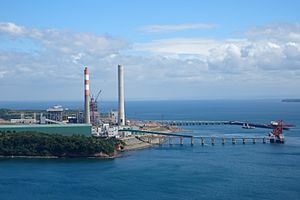 Bataan is a location of bulk power generation, where most of the power generated is sent to the Luzon Grid. Most power plants in Bataan rely on fossil fuels, like oil and coal, but renewable energy sources, primarily solar power, form part of the total generation. The total output of existing power plants equals to 2068.1 MW, and new power plants to start operation will increase the output to 4224.1 MW.

The Bataan Nuclear Power Plant in Morong, with a design 600 MW capacity, was supposed to be the first nuclear power plant in the Philippines. It was supposed to commence operation in 1986, but was mothballed amidst critical opposition to the Marcos regime and concerns on nuclear power. There is some discussion of either rehabilitating the plant, which would likely be uneconomical, or constructing a new nuclear power station.

Power distribution in the province are served by the Peninsula Electric Cooperative (PENELCO), but some large customers have their power supply sourced from the transmission grid, operated by National Grid Corporation of the Philippines (NGCP), whose network of 69,000 volt lines supply substations owned by PENELCO. On Freeport Area of Bataan (FAB) and barangays Malaya and Maligaya, they are served by the National Transmission Corporation (TransCo) – FAB branch through its distribution facilities within the freeport.

Starting late 2017, the 1Bataan Integrated Transport System had reactivated the ferry services from Esplanade at the Mall of Asia, Pasay City to Port Capinpin in Orion. The land travel that normally takes two and a half hours becomes one hour when one chooses to take the ferry. In addition, shuttles are available to bring the ferry disembarking at Orion to drop-off points heading towards Balanga, Bataan, or going towards the town of Mariveles.

Bataan is served by a network of national highways and one expressway. Roman Superhighway, part of highway N301, and Jose Abad Santos Avenue, or highway N3 and Olongapo-Gapan Road, forms the backbone of the national highway network. Subic–Clark–Tarlac Expressway, a toll expressway, links the province with Pampanga and Tarlac. Bataan/Old National Road and Governor J.J. Linao National Road forms the secondary network, which connects the smaller municipalities with the main highway network.

All content from Kiddle encyclopedia articles (including the article images and facts) can be freely used under Attribution-ShareAlike license, unless stated otherwise. Cite this article:
Bataan Facts for Kids. Kiddle Encyclopedia.