The Bataan Death March was the forcible transfer by the Imperial Japanese Army of 60,000–80,000 American and Filipino prisoners of war from Saysain Point, Bagac, Bataan and Mariveles to Camp O'Donnell, Capas, Tarlac, via San Fernando, Pampanga, where the prisoners were loaded onto trains.

The transfer began on April 9, 1942, after the three-month Battle of Bataan in the Philippines during World War II.

The total distance marched from Mariveles to San Fernando and from the Capas Train Station to Camp O'Donnell is variously reported by differing sources as between 60 and 69.6 miles (96.6 and 112.0 km).

Differing sources also report widely differing prisoner of war casualties prior to reaching Camp O'Donnell: from 5,000 to 18,000 Filipino deaths and 500 to 650 American deaths during the march. The march was characterized by severe physical abuse and killings.

After the war, the Japanese commander, General Masaharu Homma and two of his officers were tried in United States military commissions on charges of failing to prevent their subordinates from committing war crimes.

The Fall of Bataan

On April 9, 1942, as the final stage of the Battle of Bataan, approximately 75,000 Filipino and American soldiers, commanded by Major General Edward "Ned" P. King, Jr., were formally surrendered to a Japanese army of 54,000 men under Lt. General Masaharu Homma.

Logistics planning to move the prisoners of war from Mariveles to Camp O'Donnell, a prison camp in the province of Tarlac, was handed down to transportation officer Major General Yoshitake Kawane ten days prior to the final Japanese assault. The Japanese, having expected the fighting to continue, anticipated about 25,000 prisoners of war and were inadequately prepared and/or unwilling to humanely transport a group of prisoners whose number reached almost three times that estimate.

Prisoners on the march from Bataan to the prison camp, May 1942. (National Archives)

He asked whether the Americans and Filipinos would be well treated. The Japanese aide-de-camp replied: “We are not barbarians.”

The majority of the prisoners of war were immediately subjected to robbery of their most trivial keepsakes and belongings and subsequently forced to endure a grueling 90-mile enforced march in deep dust, over rough roads, and crammed into sub-standard rail cars to captivity at Camp O’Donnell. Thousands died along the way from disease, starvation, dehydration, heat stroke, untreated wounds, and even executions.

Those few who were lucky enough to travel to San Fernando on trucks still had to endure more than 25 miles of marching. Prisoners were beaten randomly, and were often denied the food and water they were promised. Those who fell behind were usually executed or left to die.

On the Bataan Death March, approximately 54,000 of the 72,000 prisoners reached their destination. The death toll of the march is difficult to assess as thousands of captives were able to escape from their guards. All told, approximately 5,000-10,000 Filipino and 600-650 American prisoners of war died before they could reach Camp O'Donnell.

On June 6, 1942 the Filipino soldiers were granted amnesty by the Japanese military and released. The American prisoners continued to be held, eventually to be transferred to camps outside of the Philippines.

The start of this process began with American prisoners moving from Camp O'Donnell to Cabanatuan. Acting as a staging camp, many of these American prisoners then were sent from Cabanatuan to prison camps in Japan, Korea, and Manchuria in transports known as "Hell Ships."

The 511 prisoners-of-war who still remained at the Cabanatuan Prison Camp as of January 1945 were freed during an attack on the camp led by United States Army Rangers later known as The Great Raid.

The Bataan Death March is commemorated every year at White Sands Missile Range just outside of Las Cruces, New Mexico. The march, which covers 26.2 miles via paved road and sandy trails, allows 4000 entrants from both civilian and many military units both International and the United States armed services. Several of the few remaining Bataan prisoners await the competitors to congratulate them on their success of the grueling march.

The 194th’s Company A was deployed to the Philippines in the fall of 1941. To commemorate the military and civilian prisoners that were forced to march from Bataan to Camp O’Donnell, an annual Bataan Memorial March, organized by the 194th Armor Regiment of the Minnesota Army National Guard and is held in Brainerd, MN. The march is open to anyone who wishes to participate with ten and twenty mile distances. The march has different categories consisting of teams, individuals, light pack, or a heavy pack. A closing ceremony is held at the end to award the finishers and pay tribute to the survivors and their comrades who did not survive the death march. 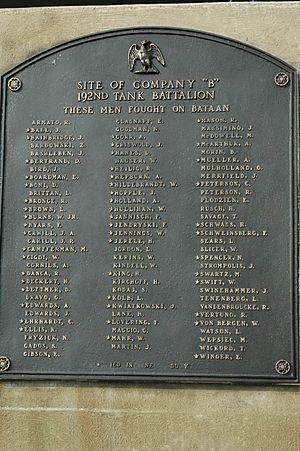 For 65 years, this small western suburb of Chicago has marked the second Sunday in September as "Maywood Bataan Day". This is the anniversary of the first Maywood Bataan Day held on the second weekend of September, 1942. At that time, residents of this suburb were raising awareness of the status of nearly 100 Maywood National guard troops who were taken prisoner when American forces surrendered Bataan on April 9th, 1942. These men were forced to endure the Death March, prison camps, hell ships and eventually slave labor in Japan. The men were part of Company B of the 192nd Tank Battalion. The original Maywood Bataan Day drew more than 100,000 spectators, dozens of marching bands, and celebrities including the Mayor Ed Kelley of Chicago, and other movie and radio stars. Today's celebration is much smaller, but still draws several hundred people. The service is supported by the village of Maywood, IL and a non-profit group, the Maywood Bataan Day Organization.

All content from Kiddle encyclopedia articles (including the article images and facts) can be freely used under Attribution-ShareAlike license, unless stated otherwise. Cite this article:
Bataan Death March Facts for Kids. Kiddle Encyclopedia.