River dolphins are a polyphyletic group of fully aquatic mammals that reside exclusively in freshwater or brackish water. They are an informal grouping of dolphins, which itself is a paraphyletic group within the infraorder Cetacea. The river dolphins comprise the extant families Platanistidae (the Indian dolphins) (Old World family), Iniidae (the Amazonian dolphins) and Pontoporiidae (the brackish dolphins) (New World families). There are five extant species of river dolphins. River dolphins, alongside other cetaceans, belong to the clade Cetartiodactyla, with even-toed ungulates, and their closest living relatives the hippopotamuses, from which they diverged about 40 million years ago.

River dolphins are relatively small compared to other dolphins, having evolved to survive in warm, shallow water and strong river currents. They range in size from the 5-foot (1.5 m) long South Asian river dolphin to the 8-foot (2.4 m) and 220-pound (100 kg) Amazon river dolphin. Several species exhibit sexual dimorphism, in that the males are larger than the females. They have streamlined bodies and two limbs that are modified into flippers. River dolphins use their conical-shaped teeth and long beaks to capture fast-moving prey in murky water. They have well-developed hearing that is adapted for both air and water; they do not really rely on vision since the water they swim in is usually very muddy. These species are well-adapted to living in warm, shallow waters, and, unlike other cetaceans, have little to no blubber.

River dolphins are not very widely distributed; they are all restricted to certain rivers or deltas. This makes them extremely vulnerable to habitat destruction. River dolphins feed primarily on fish. Male river dolphins typically mate with multiple females every year, but females only mate every two to three years. Calves are typically born in the spring and summer months and females bear all the responsibility for raising them. River dolphins produce a variety of vocalizations, usually in the form of clicks and whistles.

River dolphins are rarely kept in captivity; breeding success has been poor and the animals often die within a few months of capture. As of 2015[update], there were only four river dolphins in captivity.

Differences between marine and river dolphins 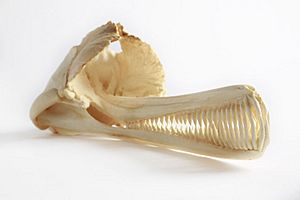 River dolphins have a torpedo shaped body with a flexible neck, limbs modified into flippers, non-existent external ear flaps, a tail fin, and a small bulbous head. River dolphin skulls have small eye orbits, a long snout and eyes placed on the sides of the head. River dolphins are rather small, ranging in size from the 5-foot (1.5 m) long South Asian river dolphin to the 8-foot (2.4 m) and 220-pound (100 kg) Amazon river dolphin. They all have female-biased sexual dimorphism, with the females being larger than the males. River dolphins are polygynous, meaning male river dolphins typically mate with multiple females every year, but females only mate every two to three years. Calves are typically born in the spring and summer months and females bear all the responsibility for raising them.

River dolphins have conical teeth, used to catch swift prey such as small river fish. They also have very long snouts, with some measuring 23 inches (58 cm), four times longer than most of their oceanic counterparts. They have a two-chambered stomach that is similar in structure to that of terrestrial carnivores. They have fundic and pyloric chambers. Breathing involves expelling stale air from their blowhole, followed by inhaling fresh air into their lungs. They do not have the iconic spout, as this only forms when the warm air exhaled from the lungs meets cold external air, which does not occur in their tropical habitats.

River dolphins have a relatively thin layer of blubber. Blubber can help with buoyancy, protection from predators (they would have a hard time getting through a thick layer of fat), energy for leaner times, and insulation from harsh climates. The habitats of river dolphins lack these needs.

River dolphins have two flippers and a tail fin. These flippers contain four digits. Although river dolphins do not possess fully developed hind limbs, some possess discrete rudimentary appendages, which may contain feet and digits. River dolphins are slow swimmers in comparison to oceanic dolphins, which can travel at speeds up to 35 miles per hour (56 km/h); the tucuxi can only travel at about 14 miles per hour (23 km/h). Unlike other cetaceans, their neck vertebrae are not fused together, meaning they have greater flexibility than other non-terrestrial aquatic mammals, at the expense of speed. This means they can turn their head without actually moving their entire body. When swimming, river dolphins rely on their tail fins to propel themselves through the water. Flipper movement is continuous. River dolphins swim by moving their tail fins and lower bodies up and down, propelling themselves through vertical movement, while their flippers are mainly used for steering. All species have a dorsal fin. 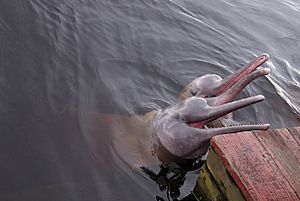 The ears of river dolphins have specific adaptations to their aquatic environment. In humans, the middle ear works as an impedance equalizer between the outside air's low impedance and the cochlear fluid's high impedance. In river dolphins, and other cetaceans, there is no great difference between the outer and inner environments. Instead of sound passing through the outer ear to the middle ear, river dolphins receive sound through the throat, from which it passes through a low-impedance fat-filled cavity to the inner ear. The ear is acoustically isolated from the skull by air-filled sinus pockets, which allows for greater directional hearing underwater. Dolphins send out high frequency clicks from an organ known as a melon. This melon consists of fat, and the skull of any such creature containing a melon will have a large depression. This allows river dolphins to produce biosonar for orientation. They are so dependent on echolocation that they can survive even if they are blind. Beyond locating an object, echolocation also provides the animal with an idea on the object's shape and size, though how exactly this works is not yet understood. The small hairs on the rostrum of the Amazon river dolphin are believed to function as a tactile sense, possibly to compensate for their poor eyesight.

River dolphins have very small eyes for their size, and do not have a very good sense of sight. In addition, the eyes are placed on the sides of the head, so the vision consists of two fields, rather than a binocular view like humans have. When river dolphins surface, their lens and cornea correct the nearsightedness that results from the refraction of light. They have both rod and cone cells, meaning they can see in both dim and bright light. Most river dolphins have slightly flattened eyeballs, enlarged pupils (which shrink as they surface to prevent damage), slightly flattened corneas and a tapetum lucidum; these adaptations allow for large amounts of light to pass through the eye and, therefore, a very clear image of the surrounding area. They also have glands on their eyelids and an outer corneal layer that act as protection for the cornea.

Olfactory lobes are absent in river dolphins, suggesting that they have no sense of smell.

River dolphins are not thought to have a sense of taste, as their taste buds are atrophied or missing altogether. However, some dolphins have preferences between different kinds of fish, indicating some sort of attachment to taste.

All content from Kiddle encyclopedia articles (including the article images and facts) can be freely used under Attribution-ShareAlike license, unless stated otherwise. Cite this article:
River dolphin Facts for Kids. Kiddle Encyclopedia.