Māui dolphin or popoto (Cephalorhynchus hectori maui) is a subspecies of the Hector's dolphin (Cephalorhynchus hectori)—New Zealand's only endemic cetacean species. Māui dolphin are only found off the west coast of New Zealand's North Island, and are now one of the rarest and smallest dolphin subspecies globally. The latest population size estimate for the Māui dolphin subspecies estimated 63 individuals of age one year or older (95% CL = 57, 75). Both the Māui dolphin and South Island Hector's dolphin are threatened by commercial fisheries, including set-netting and trawling, recreational netting, and disease including toxoplasmosis and brucellosis. Low food availability may also be an issue for Māui dolphin, which may increase their susceptibility to climate change.

The word "Māui" in the dolphin's name comes from Te Ika-a-Māui, the Māori name for New Zealand's North Island. However, the Māori word for the dolphin itself is popoto.

In 2002, Māui dolphins were classified as a subspecies of Cephalorhynchus hectori. Previously, they had been known as the North Island Hector's dolphin. Alan Baker found genetic and skeletal differences dolphins which made them distinct from South Island Hector's dolphins. These significant differences over a small geographical distance have not been found in any other studies of marine mammals. So far, 26 different mitochondrial DNA identification haplotypes have been found in Cephalorhynchus hectori, the Māui 'G' haplotype being one of them.

In 2002, Hector's dolphins were not known to be capable of swimming from the South Island to the North Island and co-existing with Māui dolphins. Instead, the deep waters of the strait were understood to have been an effective barrier between South Island Hector's and North Island Māui subspecies for between 15,000 and 16,000 years. The 2012 Auckland University/Department of Conservation boat survey tissue sampling of Māui in core range, which included historical samples, revealed three Hector's dolphins identified in this range area (two of them alive) along with another five Hector's being disclosed or sampled between Wellington and Oakura between 1967 and 2012.

No evidence so far indicates the Hector's and Māui dolphins interbreed, but given their close genetic composition, they likely could. Interbreeding may increase the numbers of dolphins in the Māui range and reduce the risk of inbreeding depression, but such interbreeding could eventually result in a hybridisation of the Māui back into the Hector's species and lead to a reclassification of Māui as again the North Island Hector's. Hybridisation in this manner threatens the Otago black stilt and the Chatham Islands' Forbes parakeet and has eliminated the South Island brown teal as a subspecies. Researchers have also identified potential interbreeding as threatening the Māui with hybrid breakdown and outbreeding depression.

Māui dolphins are physically very similar to South Island Hector's dolphins. They are most easily differentiated from other New Zealand cetacean species by: their distinctive grey, white, and black markings; a short snout; unique, rounded dorsal fins; and small, but solidly-built bodies (Hector's dolphins are the smallest dolphin species globally). Female Māui dolphins grow to 1.7 m long and weigh up to 50 kg; males are slightly smaller and lighter.

The life history of Māui dolphins is assumed to be very similar to that of South Island Hector's dolphins. Hector's dolphins are known to live to at least 22 years old, based on photo-based capture-recapture records last updated in 2006, and become sexually mature at around six to eight years of age, after which they produce one calf every two to four years. Very little is known about the Māui dolphin's reproductive physiology.

Like Hector's dolphins, Māui dolphins are most abundant in coastal waters with high turbidity Māui dolphins spend much of their time making dives to find fish on the sea floor, though will also forage in mid water and near the surface. The diet of Māui dolphins is poorly understood though is known to include ahuru, red codling and Peltorhamphus flatfish, based on the stomach contents of three dead individuals. These species are also known to be among the key prey of South Island Hector's dolphins. Known predators of Hector's and Māui dolphins include broadnose sevengill shark, great white shark and blue shark.

Māui dolphins use echolocation to navigate, communicate, and find their food. High-frequency ultrasonic clicks reflect back to the dolphin any objects found in the water. This is unique because other dolphins communicate through whistles rather than clicks. 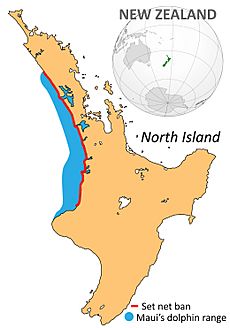 Range of Māui dolphin (blue) in New Zealand's North Island, with the area covered by the net ban marked in red

The latest estimate of the Māui dolphin subspecies is 63 individuals of age 1 year or older (95% CL = 57, 75), based on genetic capture-recapture data. Māui dolphins are listed on the IUCN Red List as Critically Endangered, and by the Department of Conservation in the New Zealand Threat Classification System as "Nationally Critical", on the basis of very low population size.

Māui dolphins are only found off the west coast of the North Island of New Zealand. They are generally found close to shore in groups or pods of several dolphins, and are generally seen in water shallower than 20 metres (66 ft), though may also range further offshore. The current range of the Māui extends from Maunganui Bluff in the north to Whanganui in the south. Māui dolphins (confirmed from DNA analysis) have been found beachcast as far south as Wellington Harbour. Hector's dolphins (also confirmed from DNA samples) were found beachcast at Peka Peka in 2005 and at Waikanae in 1967, along the Horowhenua coastline, and Opunake beach in 2012.

Dolphin sighting information released by DOC in September 2013 includes listing three public sightings of Hector's or Māui dolphins along the coast immediately north of Wellington in late 2011. Four other sightings of Hector's or Māui dolphins occurred along the east and north coasts of the North island between Whanganui and Waitara and another along the Poverty Bay coast in early 2012. Sightings of this type of dolphin along the coast north of Wellington are infrequent, with the DOC database reporting only seven since 1970, though may suggest a more widespread and larger populations in the past.

A total 15 deaths from all causes have been recorded along the west coast of the North Island, since the first major restrictions on commercial fishing to protect Māui dolphins were imposed in 2003. Of these, three have been confirmed as Hector's dolphins and, where the cause of death could be determined, the deaths of all but one were from disease and natural causes. The single Hector's or Māui dolphin death attributed to fishing was captured in a set net off Cape Egmont, in Taranaki waters in January 2012.

In 2019, a government-funded risk assessment model fitted to fisheries observer capture records estimated that less than 0.3 Hector's or Māui dolphins die each year in commercial set nets on the West Coast of the North Island, and less than 0.1 die each year in commercial trawls. These estimates are considerably lower than those of a government-appointed panel of experts in 2012, which estimated that set-netting and trawling resulted in an average of five Māui dolphin deaths each year, based on expert knowledge.

Set netting is prohibited inside the entrances of the Kaipara, Manukau, and Raglan Harbours and Port Waikato. The presence of Māui dolphins within these harbours is disputed, though they are known to use the harbour mouths.

Based on 2012 population estimates, the World Wildlife Fund in New Zealand launched "The Last 55" campaign in May 2014, calling for a full fishing ban over what it believed is their entire range. The International Whaling Commission supports more fishing restrictions, but the New Zealand government has resisted the demands and questioned the reliability of the evidence presented to the IWC that Māui dolphins inhabit the areas they are said to inhabit. Some groups in the fishing industry are against increased bans on set nets into waters further offshore and inside harbours, and say other factors are responsible for low population size, including disease, pollution, mining, and natural predation.

In June 2014, the government decided to open up 3,000 square kilometres (1,200 sq mi) of the West Coast North Island Marine Mammal Sanctuary—the main habitat of the Māui dolphin—for oil drilling. This amounts to one-quarter of the total sanctuary area.

Māui dolphins currently occupy the warmest part of the Hector's dolphin species' range and, so, may be particularly susceptible to the effects of oceanic warming. An analysis of trawl survey data indicated that the food resources available to Māui dolphins are around an order of magnitude lower than those available to South Island Hector's dolphins. The low availability of key prey species may exacerbate the susceptibility of Māui dolphin to the effects of climate change.

All content from Kiddle encyclopedia articles (including the article images and facts) can be freely used under Attribution-ShareAlike license, unless stated otherwise. Cite this article:
Māui dolphin Facts for Kids. Kiddle Encyclopedia.