The pantropical spotted dolphin is a species of dolphin found in all the world's temperate and tropical oceans. The species was beginning to come under threat due to the killing of millions of individuals in tuna purse seines. In the 1980s, the rise of "dolphin-friendly" tuna capture methods saved millions of the species in the eastern Pacific Ocean and it is now one of the most abundant dolphin species in the world.

The species was first described by John Gray in 1846. Gray's initial analysis included the Atlantic spotted dolphin in this species. They are now regarded as separate. Both the genus and specific names come from Latin words meaning thin or thinning.

Three subspecies are recognised in Rice's 1998 survey of cetacean taxonomy. Two of these have not been formally named. 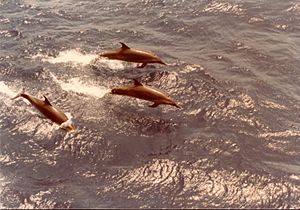 The pantropical spotted dolphin varies significantly in size and coloration throughout its range. The most significant division is between coastal and pelagic varieties. The coastal form is larger and more spotted. (These two forms have been divided into subspecies only in eastern Pacific populations).

Spots are key defining characteristics in adults, though immature individuals are generally uniformly colored and susceptible to confusion with the bottlenose dolphin. Populations around the Gulf of Mexico may be relatively spot-free even in adulthood. In the Atlantic, confusion is possible with the Atlantic spotted dolphin.

The dolphin has a long, thin beak. The upper and lower jaws are darkly colored, but are separated by thin, white "lips". The chin, throat, and belly are white to pale grey with a limited number of spots. The flanks are separated into three distinct bands of color — the lightest at the bottom, followed by a thin, grey strip in the middle of the flank, and a dark-grey back. The tall concave dorsal fin is similarly colored. The thick tail stock matches the color of the middle band.

The pantropical spotted dolphin is very active and is prone to making large, splashy leaps from the sea. It is a common breacher and will often clear the water for a second or more. Bow-riding and other play with boats is common.

In the eastern Pacific, the dolphin is often found swimming with yellowfin tuna (hence the problem with dolphin deaths caused by tuna fishing). However, they do not feed on that fish. In fact, the two species have similar diets of small epipelagic fish. In other areas, the species may also feed on squid and crustaceans.

The pantropical spotted dolphin, as its name implies, is found across all tropical and subtropical waters around the world — roughly speaking all oceans and seas between 40°N and 40°S. The total world population is in excess of three million — the second-most abundant cetacean after the bottlenose dolphin — of which two million are found in the eastern Pacific. However, this represents a decrease from at least 7 million since the 1950s.

Centres of highest population density are the shallow warmest waters (water temperature in excess of 25 °C). They also tend to concentrate where a high temperature gradient is found.

Appearances of vagrancy in the Levantine Basin of the Mediterranean Sea through Suez Canal is expected. 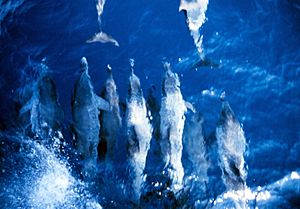 Dolphin swimming ahead of the NOAA Ship Rude

The pantropical spotted dolphin's propensity for associating with tuna, particularly in the eastern Pacific, has in recent history been a very real danger. In the 1960s and 1970s, fishermen would capture thousands of dolphin and tuna at once using purse seine nets. The dolphins all died. Over a period of about 25 years, 75% of this region's population, and over half the world's total were wiped out. The issue has received wide public attention. Many major supermarkets have found it economically expedient to use tuna suppliers whose fisherman catch tuna by more discriminatory means, and thus advertise their tuna product as dolphin-friendly. Some such products are approved by the Whale and Dolphin Conservation Trust.

Negative impacts from fishing activities remain, despite broad "dolphin safe" practices. Instead of reducing numbers through direct mortalities, fishing activities have disrupted the reproductive output of the northeastern pantropical spotted dolphin. The fishing had a negative impact on calf survival rates and/or birth rates. This could be caused when fishing operations separate mothers from their suckling calves, interfere with the conception or gestation of calves, or a combination of the two.

All content from Kiddle encyclopedia articles (including the article images and facts) can be freely used under Attribution-ShareAlike license, unless stated otherwise. Cite this article:
Pantropical spotted dolphin Facts for Kids. Kiddle Encyclopedia.