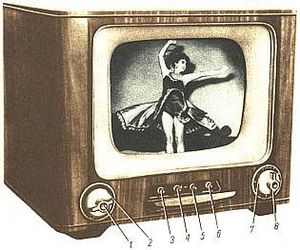 Early Monochrome analog receiver with large dials for volume control and channel selection, and smaller ones for fine-tuning, brightness, contrast, and horizontal and vertical hold adjustments

Analog television or analogue television is the original television technology that uses analog signals to transmit video and audio. In an analog television broadcast, the brightness, colors and sound are represented by rapid variations of either the amplitude, frequency or phase of the signal.

The first commercial television systems were black-and-white; the beginning of color television was in the 1950s.

Analog television may be wireless (terrestrial television and satellite television) or can be distributed over a cable network using cable converters (cable television).

All broadcast television systems used analog signals before the arrival of digital television (DTV). Motivated by the lower bandwidth requirements of compressed digital signals, since the 2000s a digital television transition is proceeding in most countries of the world, with different deadlines for the ending of analog broadcasts.

All content from Kiddle encyclopedia articles (including the article images and facts) can be freely used under Attribution-ShareAlike license, unless stated otherwise. Cite this article:
Analog television Facts for Kids. Kiddle Encyclopedia.