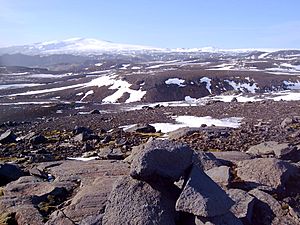 Eyjafjallajökull in March 2006, viewed from a recreation area on the Sólheimajökull, a glacier on the Katla volcano

Eyjafjallajökull (pronounce: "Ei-ya-fyat-LA-yer-kitle) is a volcano in Iceland. The name means "island-mountains glacier".

The south end of the mountain was once part of the coastline of the Atlantic ocean. The sea gradually moved about 5km south. Now there are beautiful steep cliffs and waterfalls.

The volcano erupted several times in 1821 and 1822. Some cattle and sheep died, presumably because of fluoride poisoning.

At Christmas 2009 the volcano started to show signs of being active again. On March 27, 2010 it started to erupt.

On 14 April 2010 Eyjafjallajökull started to erupt heavily from the top crater in the bottom left of the glacier. This made meltwater rush down into the nearby rivers. Many people had to be evacuated. Volcanic ash was thrown several kilometres into the atmosphere. The dust blew northwest over Europe on the 15th and 16th of April 2010. It became very dangerous for aeroplanes to fly and so all commercial flights were stopped in most parts of northern Europe. This caused chaos for travellers, many of whom were trying to return home after their Easter vacation. The chaos continued for many days.

All content from Kiddle encyclopedia articles (including the article images and facts) can be freely used under Attribution-ShareAlike license, unless stated otherwise. Cite this article:
Eyjafjallajökull Facts for Kids. Kiddle Encyclopedia.