Kids Encyclopedia Facts
This is an Icelandic name. The last name is a patronymic or matronymic, not a family name; this person is properly referred to by the given name "Ólafur Ragnar Grímsson". 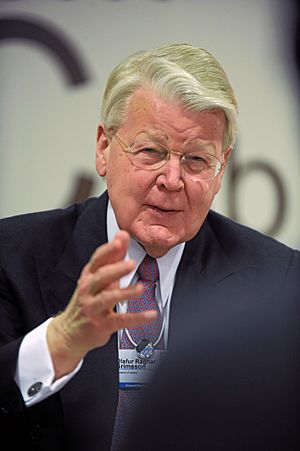 He was born in Ísafjörður, Iceland.

He married Guðrún Katrín Þorbergsdóttir in 1974, who gave birth to twin daughters the following year. Guðrún Katrín was very popular in Iceland, and her charm is without a doubt one of the main reasons her husband was elected; she charmed the nation from the start of his campaign. Her death from cancer in 1998 was a shock to the nation and her family.

Ólafur's second marriage was to Dorrit Moussaieff to whom he had been engaged since May 2000. This took place on his 60th birthday May 14, 2003.

All content from Kiddle encyclopedia articles (including the article images and facts) can be freely used under Attribution-ShareAlike license, unless stated otherwise. Cite this article:
Ólafur Ragnar Grímsson Facts for Kids. Kiddle Encyclopedia.