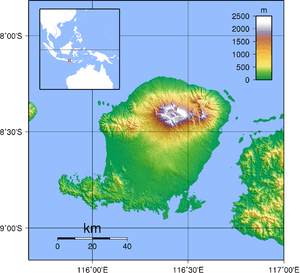 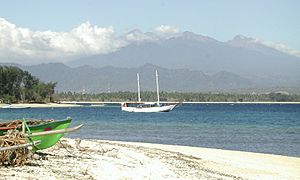 Lombok (population 2,950,105 in 2005) is an island in West Nusa Tenggara province, Indonesia. It is to the east of Bali on the other side of the Lombok Strait. The capital and largest city on the island is Mataram.

The Gili Islands are very popular with tourists. There are many places to dive and the beaches are lovely.

In the summer of 2018, two major earthquakes, in July (6.4 magnitude) and in August (6.9 magnitude) hit the city killing nearly 270 people all together.

All content from Kiddle encyclopedia articles (including the article images and facts) can be freely used under Attribution-ShareAlike license, unless stated otherwise. Cite this article:
Lombok Facts for Kids. Kiddle Encyclopedia.