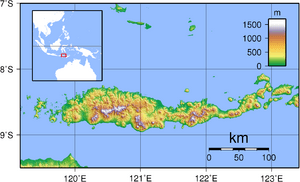 Flores is one of the Lesser Sunda Islands, an island arc. Its area is about 14,300 square kilometres (5,500 sq mi). It goes east from the island of Java. There are about 1.5 million people in Flores. The largest town is Maumere.

Flores is east of Sumbawa and Komodo. It is west of Lembata and the Alor Archipelago. To the southeast is Timor. To the south is the Sumba strait. The Flores Sea is to the north.

All content from Kiddle encyclopedia articles (including the article images and facts) can be freely used under Attribution-ShareAlike license, unless stated otherwise. Cite this article:
Flores Facts for Kids. Kiddle Encyclopedia.