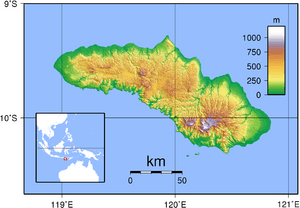 Sumba (Indonesian: Pulau Sumba) is an island in eastern Indonesia. It is one of the Lesser Sunda Islands and is in the province of East Nusa Tenggara. Sumba has an area of 11,059.6 square kilometres (4,270.1 square miles), and the population was estimated to be 755,849 in 2015. To the northwest of Sumba is Sumbawa, to the northeast, across the Sumba Strait (Selat Sumba), is Flores, to the east, across the Savu Sea, is Timor, and to the south, across part of the Indian Ocean, is Australia. 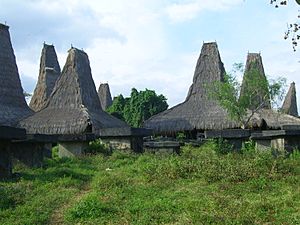 Before colonization by western Europeans in the 1500s, Sumba was inhabited by Melanesian and Austronesian people.

In 1522, through the Portuguese, the first ships from Europe arrived. By 1866 Sumba belonged to the Dutch East Indies, although the island did not come under real Dutch administration until the 20th century. Jesuits opened a mission in Laura, West Sumba in 1866.

Historically, this island exported sandalwood and was known as Sandalwood Island, or Sandel Island.

Despite contact with western cultures, Sumba is one of the few places in the world where megalithic burials are used as a 'living tradition' to inter prominent individuals when they die. Burial in megaliths is a practice that was used in many parts of the world during the Neolithic and Bronze Ages. It has survived to this day in Sumba and has raised significant interest from scholars. At Anakalang, for instance, quadrangular adzes have been unearthed.

Another long-lasting tradition is the sometimes lethal game of pasola, in which teams of often several hundred horse-riders fight with spears.

On August 19, 1977, an earthquake measuring 7.0 on the Richter scale occurred and caused a tsunami. 316 people were killed on the island and islands off the west coast. 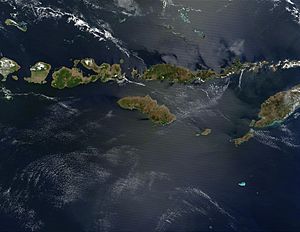 The Lesser Sunda Islands; Sumba is in the bottom centre

The largest town on the island is the main port of Waingapu, with a population of about 52,755.

The landscape is low, limestone hills, rather than the steep volcanoes of many Indonesian islands. There is a dry season from May to November and a rainy season from December to April. The western side of the island is more fertile and more heavily populated than the east.

Due to its distinctive flora and fauna Sumba has been categorised by the World Wildlife Fund as the Sumba deciduous forests ecoregion. Although generally thought to be originally part of the Gondwana southern hemisphere supercontinent, recent research suggests that it might have detached from the South East Asia margin. Sumba is in the Wallacea ecozone, having a mixture of plants and animals of Asian and Australasian origin. Most of the island was originally covered in deciduous monsoon forest while the south-facing slopes, which remain moist during the dry season, were evergreen rainforest. 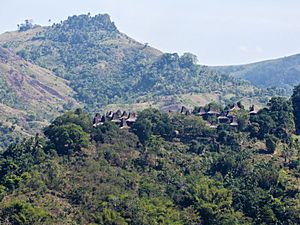 A village in Sumba

There are a number of mammals, but the island is particularly rich in bird-life with nearly 200 birds, of which seven endemic species and a number of others are found only here and on some nearby islands. The endemic birds include four vulnerable species — the secretive Sumba boobook owl, Sumba buttonquail, red-naped fruit-dove, and Sumba hornbill — as well as three more common species: the Sumba green pigeon, Sumba flycatcher, and apricot-breasted sunbird. Saltwater crocodiles can still be found in some areas.

The Sumba hornbill or Julang Sumba (Rhyticeros everetti) is under increasing threat of extinction. Indiscriminate deforestation is threatening their survival. The population is estimated at less than 4,000 with an average density of six individuals per square kilometer. A hornbill can fly to and from over an area of up to 100 square kilometers.

Most of the original forest has been cleared for the planting of maize, cassava, and other crops so only small isolated patches remain. Furthermore, this clearance is ongoing due to the growing population of the island and this represents a threat to the birds.

In 1998 two national parks were designated on the island for the protection of endangered species: the Laiwangi Wanggameti National Park and Manupeu Tanah Daru National Park

All content from Kiddle encyclopedia articles (including the article images and facts) can be freely used under Attribution-ShareAlike license, unless stated otherwise. Cite this article:
Sumba Facts for Kids. Kiddle Encyclopedia.