Kupang is the provincial capital of East Nusa Tenggara province in southeast Indonesia.

Kupang's economy is mainly based on its cement industry and the export and import of goods from its busy port. The airport of Kupang El Tari is approximately 8 km from the city center to the east.

As capital of East Nusa Tenggara, the transport and administrative links from Kupang with isolated islands are extensive. 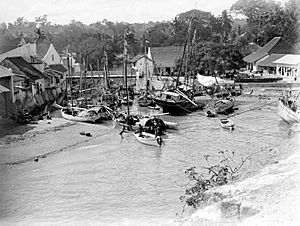 The harbor of Kupang in the early 20th century 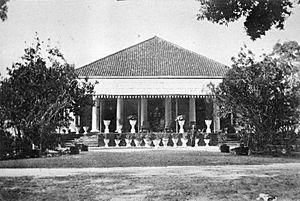 The location was an important port and trading point during the Portuguese and Dutch colonial eras. There are ruins and remnant signs of the colonial presence in the city.

The city was an important landing and refueling place for early long distance airplane flights between Europe and Australia in the early twentieth century. It was an important location during the conflict in East Timor, for the Indonesian military, as well as the militias. The camps around Kupang were also of significant impact on the city.

In 1962, the University of Nusa Cendana was established, and the city became important both in the field of education and also economically. 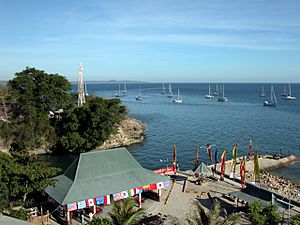 Lt William Bligh navigated the overcrowded 23 foot (7 m) open launch on an epic 41-day voyage first to Tofua and then to the West Timor city of Kupang equipped only with a sextant and a pocket watch— no charts or compass. He recorded the distance as 3,618 nautical miles (6710 km).

He passed through the difficult Torres Strait along the way and landed on June 14. The only casualty of his voyage was a crewman named John Norton who was stoned to death by the natives of Tofua, the first island they tried to land on.

News of the journey of Captain Bligh inspired the escape of a party of convicts from the penal colony at Sydney Cove, Australia. A group of nine convicts and two children, led by William Bryant, stole a small uncovered government boat and escaped from Port Jackson, Australia. Ten weeks later, they arrived at Kupang, having covered 3,254 nautical miles (6,026 km), a feat as remarkable as Blighs, given that only three members of the group had any sailing experience. 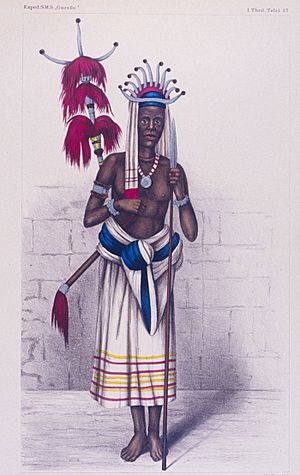 Timor warrior at the area of Kupang 1875

Kupang is the first port of call for yachts in the annual Sail Indonesia rally which starts in Darwin, Australia towards the end of July each year. In 2006 about 100 yachts from around the world took part in the rally. From Kupang yachts head north to Alor and then stop at various ports in Indonesia over a period of about three months ending up in Singapore.

Kupang has a sister city relationship with:

All content from Kiddle encyclopedia articles (including the article images and facts) can be freely used under Attribution-ShareAlike license, unless stated otherwise. Cite this article:
Kupang Facts for Kids. Kiddle Encyclopedia.