East Nusa Tenggara (Indonesian: Nusa Tenggara Timur – NTT) isa province of Indonesia. It is the east part of the Lesser Sunda Islands. It faces the Indian Ocean to the south and the Flores Sea to the north. There are more than 500 islands in the province. The largest islands are Sumba, Flores, and the western part of Timor. There is a land border between the province and the country East Timor. There are twenty-one regencies and the regency-level city of Kupang in the province. Kupang is the capital and largest city.

East Nusa Tenggara is the only province in Indonesia where most people are Christian It is the only Indonesian province where Roman Catholicism is the main religion. The area of the province is 47,245.82 km2. The population at the 2010 Census was 4,683,827. An official estimate of the population in January 2014 was 5,070,746. East Nusa Tenggara is one of the least developed provinces in Indonesia. Tourism is growing here. The most well-known attractions are Labuan Bajo, Komodo National Park, and Mount Kelimutu.

This is a list of Governors of East Nusa Tenggara.

Komodo dragon a large species of lizard living in this province 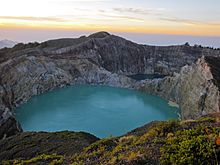 One of the crater lakes of Kelimutu 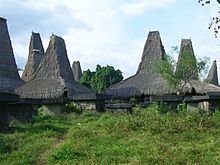 All content from Kiddle encyclopedia articles (including the article images and facts) can be freely used under Attribution-ShareAlike license, unless stated otherwise. Cite this article:
East Nusa Tenggara Facts for Kids. Kiddle Encyclopedia.