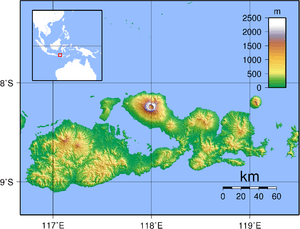 Sumbawa is an Indonesian island in the middle of the Lesser Sunda Islands chain. It has Lombok to the west, Flores to the east, and Sumba farther to the southeast. It is in the province of West Nusa Tenggara.

Sumbawa is 15,448 km² (three times the size of Lombok). About 1.5 million people live there. It marks the boundary between the islands to the west, which were influenced by religion and culture spreading from India, and the region to the east that was not so influenced.

Sumbawa is inside the Pacific Ring of Fire. It is a volcanic island, including Mount Tambora (8°14’41”S, 117°59’35”E) which exploded in 1815, the most destructive volcanic eruption in modern history (roughly four times larger than the 1883 eruption of Krakatoa, between Java and Sumatra, in terms of volume of magma ejected). The eruption killed as many as 92,000. It also apparently destroyed a small culture of Southeast Asian affinity, known to archaeologists as the Tamboran kingdom. It launched 100 cubic kilometers of ash into the upper atmosphere, which caused 1816 to be the "year without a summer."

All content from Kiddle encyclopedia articles (including the article images and facts) can be freely used under Attribution-ShareAlike license, unless stated otherwise. Cite this article:
Sumbawa Facts for Kids. Kiddle Encyclopedia.